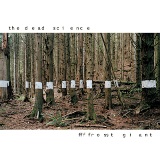 This is the second record in a row The Dead Science has released in October, a perfect month for their music. October is a time of change, a dimming of the days that is both romantic and chilling. The words 'romantic' and 'chilling' are perfect words to describe Frost Giant — their second full-length, after 2003's Submariner and 2004's EP Bird Bones in the Bug House.

Produced with Ryan Hadlock (Blonde Redhead, Black Heart Procession), the album is built around Sam Mickens' vocals, as pale and wasting as the ghost of a murdered mistress. The dry, sometimes glimmering, straw mattress of his guitar playing is perfect for Jherek Bischoff to lay his twisted wire of stand-up bass through. Bischoff's brother Korum and Nick Tamburro (who is performing live with the band) add layers of embedded, ramshackle percussion. It sounds jagged, but it's actually plays out as smooth as glass. The damage comes in the subtle spiritual malevolence that betrays the beautiful Micken melodies and the expert ensemble playing of the band.

The Dead Science strike contemplative awe in those who see them live, but Frost Giant takes them to a new level of mutually adorable and disquieting recorded music — perfectly balanced between the devil and the deep blue sea. The Bischoff brothers reportedly grew up as musically-engaged siblings on a sailboat docked on Bainbridge Island, and hired on Mickens as an organist when they were doing jazz jams at a local restaurant. Tamburro's drums, especially on stabbing album opener "Last Return" and the spine-tingling "Drrrty Magneto" (this fall's creepiest pop song) add a wave of violence to the sensual stream of sound.

Frost Giant sounds like an album Bowie would have died to make between Low and Scary Monsters, perfectly integrating Brian Eno's ambient play and improvisational studio experimentation with the glamorous madness of a strikingly charismatic voice. The lyrics are as unique and captivating as Scott Walker at his best; breezing through images of implied diseases, sleep, helpless souls, time wasted unto eternity, blood, copping dope from another dimension, sleep, sharp instruments of romance, blood.

If Morrissey really was a poet, and his band had loved what Einsturzende Neubauten would become, The Queen Is Dead would have probably sounded like this.