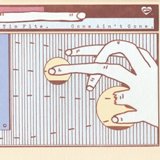 Young Tim Fite's debut was heralded by the press as label Anti's first "country/hip-hop" signing, but like most great things, there's more to it than a category or a formula (Sort of like the work of Anti's other beloved artists, including Neko Case, Nick Cave, and Tom Waits). He looks a little like Alfalfa from 'Little Rascals' and he can sound a bit like Snoop Dogg, hence probably the confusion.

The other pleasurable paradoxes of the artist behind Gone Ain't Gone are reflected in a Hall of Mirrors effect, beginning with the fact that Fite scripts and performs real, gritty, substantial songs out of manipulated music he discovers in dollar bins around his Brooklyn home. His apartment is stuffed full of the kind of records many of us flick aside to get to the good stuff at places like Jive Time. He audaciously loops and samples huge chunks of his findings as background for songs that address everything from slacking and love to murder to racial strife to heaven.

That's where the album opens: "I Hope Yer There," a beautiful gospel-themed blues with a concise strummed riff that confidently carries Fite's rhythmic prayers that you make it into the afterlife; then breaking trip-hop style a couple times before a loose, rambling rap tumbles down. The found voice of a preacher quoting scripture near the Southern rock end makes you wonder if this is one of the sickest Christian albums you've ever heard, until a profane Dick Gregory-style quote about taking over the government starts the Irish-jig jazz of the quick next track, "Toasted Rye." Then a Cure-style power pop riff kicks off the "Fight For Your Right To Party" on the album, "No Good Here" ("I've been busy, baby, I've been busy, quitting every job in New York City"). As he yells, "Your money's no good here!" you know this delicious city anthem is going to be downloaded and mix taped into infinity.

Comparisons to De La Soul to Beck spring to mind as he uses the musical spirit of the times to tell the story of the age. That is to say, like Bob Dylan in the early 60s breaking away from the pack of folkies with their primary device, the acoustic guitar, Fite creates dramatic and funny American Gothic short stories out of the elements of his peers today. With a voice reminiscent of Dave Thomas of skronk-daddies Pere Ubu or topical Brit-blues eccentric Kevin Coyne sometimes, with the flow of DMX and Everclear at others, he straddles the race line, something his samples don't forget to do either.

At this point, the album is supposed to fall apart, but the borrowings stay bright (Paul Robeson's awesome soliloquy on the power of music, here known as track six), and the songs stack up creepy and catchy throughout. "Shook" is great art-pop, totally unique. "Took A Wife" is a wonderfully written murder ballad, starting off like a romance and ending up in slaughter. (Thus tying together country death songs and hip-hop violence.) Second from the end, "Away From The Snakes" is a Coyne-style lamentation about poor men being shat on by their women and the rich, yet ends in a gorgeous little pop coda. The closing song to Gone Ain't Gone is the quietly philosophical "The More You Do" ("There's more of you when you're alone, and more of you the more you don't"). It brings us back to Tim Fite's music-crammed apartment, all about everything and nothing, and which for both he and us has served as heaven for awhile.