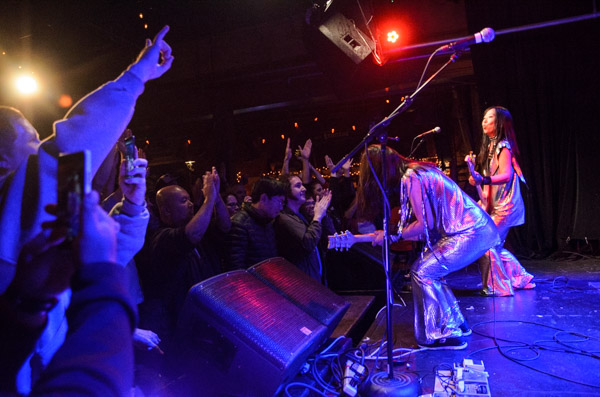 After a soul-crushing two hours in which I watched a literal human poop shout “ISIS” at me repeatedly from a big ole orange mouth (otherwise known as Debate Day #2), let me tell you what I needed: Shonen Knife.

Started the night out with opener Ichi Bichi, who describes themselves as being like “wearing glasses and contacts at the same time while dancing on a Ramones record set on 78rpm”—I can affirm this, and posit that they are possibly also the missing pop-punk soundtrack to The Munsters. They get that synthy keyboard going on “No Time,” and in my mind I just can’t help but see Herman Munster pulling another one of his ole hijinks. Equal parts spooky and rapid-fire rock, they clanged a mean cowbell and treated us to some instructive lyrics, like: “look at you whining, get a grip on your style” (a sentiment which would have been well heeded earlier in the night, by a certain orange-faced man).

Next up was Full Toilet. Once I saw a man eat a whole roll of toilet paper at a Full Toilet show! I don’t know how things shook out after that. The inimitable Kurt Bloch and co. kept the party going with their brand of bathroom punk, meaning they make you want to poop with excitement when you see them play. Their aperitif-sized songs delighted, aggressed on, illuminated, and enraptured me.

Shonen Knife may not have been a staple of the ’90s but it was certainly a kind of pop force. (Or so I’ve been told, because I am a child :(…) While their performance is still in many ways rehearsed down to its minute details (including everything from their towel-waving entrance to their matching stage outfits—handmade by member Atsuko Yamano—to the occasional synchronized head bang), it’s a formula that works. Everybody likes to think the essence of punk is anarchy and attitude, but Shonen Knife is so charming because they are exactly the opposite: an unabashed novelty act.

Even through restraint and rehearsal they still play with the energy of a teenager who just learned three new chords. They did newer songs like “Jump Into the New World,” from their latest album Adventure, as well as oldies but goodies hits like “Banana Chips” and “Twist Barbie.” Also, it’s honestly hard not to smile when somebody is singing “Meow, meow, meow / Fancy free like a cat” at you (which is not their only ode to cats).

At some point, they introduced their new drummer Risa Kawano who declared she’s “not very good at English” before she proceeded to make a sound so cute it is only on par with the tiny snores of a newborn kitten. This whole set was so friggin’ cute I can’t stand it.

If the night had a theme to it then it was does-a-body-good irreverence, which we all need a little bit of right now. God help us.