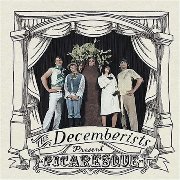 Colin Meloy has a voice similar to Brian Molko of Placebo or Gordon Gano of the Violent Femmes, an other-century voice that seems both perverted and yet more withered by others' depravity than his own. This is reflected in the tawdry tales of Portland, Oregon band The Decemberists, a five member troupe including also Chris Funk (pedal steel, theremin), Jenny Conlee (accordion, piano), Nate Query (upright bass), and John Moen (drums, from Gossamer Wings and the Fastbacks), described through relational tapestries such as the fatalistic and gripping "We Both Go Down Together" and the extremely ambitious near-nine minutes of "Mariner's Revenge Song."

The presence of guests like Sean Nelson and John Roderick lets one know that this is both an emotionally visceral and literate band, but even more than that, Meloy's songs are proudly literary. How their new label Capitol will deal with marketing their rarified music to the mass market, we shall see. Producer Chris Walla, whose work here is a masterpiece of clarity and delicate collaboration, is expressing the same optimism with his own band's marriage to Atlantic, and time will tell whether this cycle of Pac NW artists making that leap will evade previous inimical destiny.

In the meantime, we have the exquisitely eclectic thrush-rock of Kill Rock Star's Picaresque to enjoy for ourselves, a band that seems to draw comparisons to many bands, including Belle & Sebastian and Neutral Milk Hotel, but in spirit reminds me more of the operatic tendencies of fellow Dickensian rogues The Tiger Lillies or long gone dramatic klezmer vagabonds Giant Ant Farm. Meloy, who has a degree in creative writing, is a better storyteller than almost anyone writing current pop songs, as the confessions of teenage trauma in "The Sporting Life" and the weirdly sensual tangled spy world of "The Bagman's Gambit" reveal.

Meloy grew up in Montana, where through a rogue-mentor uncle he discovered The Replacements' brilliant Let It Be album, which he eloquently described his passion for and life around in what I consider the best volume of the "33 1/3" album-book series. The band self-released their five song debut EP before Hush Records released the Decemberists' first album in 2002, Castaways and Cutouts, which was re-released that same year on Kill Rock Stars. Picaresque has been said to be a set piece with the next year's lauded Her Majesty, blending theatre with a flow from the British school of eccentric folk-rock. Between which they released The Tain, a ferocious five-part mini-album based on an Irish poem from the eighth century.

But Picaresque is a great place to start, sounding gorgeous and perfect for Meloy's cinematic songs, the subtleties of which are somehow lost when he performs them stripped down solo live. Whether or not Meloy was joking that this album was recorded in 80 tracks (giggling that Walla and the Decemberists will take it back down to 24 for their debut on Capitol), the beautiful sweep and brilliant detail of Picaresque makes that seem wholly possible.