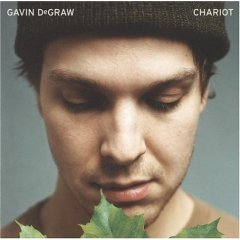 What I know of Gavin Degraw was up until a week ago limited to whatever shrapnel I caught off of my nineteen year old sister's obsession with his debut album, Chariot, and the interview he did over the phone with me from Charlotte.

The day after the twenty-minute phone call I received a copy of his album in the mail and gave it a good listen. The things Gavin had told me over the phone revealed themselves to be true and honest, and consistent with the music. He wasn't just spitting bullshit stock answers made for mediocre music leeches to mediocre-ly print.

Gavin said that above all, he is, "trying to bring some integrity back to music." An artist for BMG and Clive Davis' J Records, Gavin's songwriting seems to be an effort to do just this. Not necessarily bring integrity back to indie music, but definitely to popular-downloaded-college-girls'-dorm-room music. Musically, his guitar playing is competent and musically mature for a debut album with obvious radio ambition. But it's his piano skills that are so much further advanced, so that songs like the title track carry Gavin up and beyond the company of others in the market. The opening piano to the title track automatically makes one sit up and pay more attention, for in it is an obvious passion and earnestness of someone who has written hundreds of piano songs before this.

What hurts Gavin is that readers of a zine like this — more attuned to Jeremiah Green's return to Modest Mouse than the college pop circuit — will more often than not dismiss him on the basis of his 1) having a pretty face, 2) a photo of said pretty face holding a maple leaf on the cover of his record, and 3) a song gracing the opening credits of a show on the WB.

"Modern music is really image driven," he says. He seems conscious of his position as another name on the playlists of college-priced Dells throughout the country, alphabetically sliding in between Howie Day and John Mayer. After hearing him talk about music, anyone will have a much higher respect for Gavin. The idea of "cool" being a part of his image was met with what seemed like frustration towards the industry. He said that he would like to play larger venues and to larger crowds, "as long as they're not there to see clothing." He said he didn't understand really why people were drawn out by the "image" when, "I think the Neil Diamond is so fucking cool; not many people are cool enough to wear a shirt like that in front of people."

But despite the best of intentions, his album is not any better than good. His musicianship far surpasses his lyrical ability, and thus the songs are very uneven. And if you're someone like me who values the lyrics more than the music, than it's even harder to find great. They simply just aren't that original. But being a debut record, it's hard to blame him for writing songs called "Chemical Party" and "Just Friends." His song which graces the opening credits to the WB's "One Tree Hill" says, "I don't want to be anything other than what I've been trying to be lately" sounds like something a visiting character would make on the Dawson's Creek finale, and on the song "Belief" he opens with the lines "Belief makes things real, makes things feel, feel alright." I feel like a reborn Christian. Oh, and let's not forget the song "Crush" (a title stolen from the last decent record Dave Matthews has made, back in '98, I think) and it's about having a crush.

Gavin Degraw's "Chariot" is a first record made by a young man with good intentions and a promising future in the pop music industry, but while he is musically intriguing, he is lyrically boring. I'd love a version of the album where all the lyrics were replaced by Hey Jude-esque "Na Na's" or just simple humming, for like his compatriots in the world of pop-singer-songwriters, his voice is as pretty as the packaging his label provides for each CD-Rom enhanced disc.