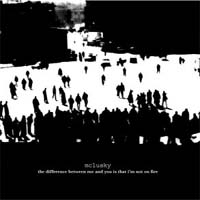 The Difference Between Me & You Is That I'm Not on Fire

They say we use about five percent our DNA for building bones, muscles and brains so we can do things like drink ourselves stupid, make money for The Man, and pontificate on the latest music releases. They also say the remaining 95 percent of our genes are junk lying dormant until some extraordinary event awakens them. One such event happened to me in 2002 with the release of mclusky's second album, mclusky does dallas. Holy Hannah that album was good!

Since then, I've been looking for ways to satiate the needs of those newly minted genes. After two years of indulging in more profanity than a kxk family reunion and believing that yes, one can actually construct a guitar from a chainsaw, mclusky reels me in with the release of The Difference Between Me and You is that I'm Not on Fire.

Like dallas, the marriage of mclusky and "producer" Steve Albini couldn't be more perfect. This earsplitting collaboration is greater than the sum of the knobs on a mixing board…or curse words in a mclusky song, or lame analogies in an album review. Listen to "Kkkitchens, what were you thinking" and you'll hear speeding steam trains with rusty steel wheels resonating through distortion box cars. Listen to "You should be ashamed, Seamus" and you'll hear fifty chainsaws chopping each other to death. I love how Albini preserves the spontaneity of the performances by keeping the music loose and heavy all at once. It is as if it were being recorded for the first time.

Just when the over-the-top everything starts to make your ears hurt, respite comes at the right moments. "Forget About Him I'm Mint" has a punk melodicism that would sound at home in 1978. "She Will Only Bring You Happiness" is surprisingly radio friendly (no curse words ma!) and has some of the best sing-along lyrics ever written: "Note to self/be erect at half past ten, be strong, be proud, be able, be charmed, be extended, be in motion, be at loggerheads." (I should also mention that I can't actually confirm that this is a great sing-along song since I missed the mclusky show last week, but I'm sure it was a wonderfully loud and sweaty experience.)

I feel a great affinity for mclusky. I just hope some of my freshly awakened genes can also repair my hearing.