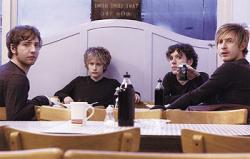 Delays, with the Jeunes, at the Croc

After the intense heat wave that's plagued Seattle this past week, it was a true delight to go out to the perfect summer night show — Delays and The Jeunes at the Crocodile. The Jeunes kicked off the evening with their melodic rock reminiscent of The Cure {the earlier Kiss Me Kiss Me Kiss Me years with some of the darkness of Pornography mixed in for good measure} but with Lou Reed replacing Robert Smith on vocals. Apparently this Lou Reed comparison comes up often but it's really fitting and combined with the bright British-style pop, it all makes for a lovely sound.

{Truth be told, they reminded my brother and I of another British band —not Joy Division, though I've heard that comparison as well — but unfortunately the name of said band eluded both of us during the show. I'm hoping he'll call me right now with the answer…}

A number of people wandering into the Croc during the Jeunes' set found themselves compelled to stay and listen. I'm guessing a fair number of converts were won to the Jeunes' cause this evening. These local lovelies have been playing a fair amount around town. I strongly advise you to see them at your earliest convenience.

After a brief interlude of the expected load-out/load-in variety, Delays took the stage and began to work their magic. If you've heard their debut album "Faded Seaside Glamour," a current favorite on KEXP {who, I might add, sponsored the show}, you know the basics: a lush-sounding combination of jangly guitars, psychedelic keyboards, and the fabulous "is it a boy or is it a girl?" vocal stylings of frontman Greg Gilbert.

I went in expecting a good show but Delays' live set proved to be one step beyond. They started off with a pretty, quiet tune that soon captivated the showroom. By the third song, "Nearer Than Heaven," I was won over completely. As Greg peeked out at the crowd through his blonde hair, Delays cast a spell with this luxurious midtempo song that got everyone in the room bobbing their heads straightaway.

The Crocodile afforded an intimate setting for Delays' handiwork, which belies the mellower sound of "Faded Seaside Glamour." These Southampton boys know how to rock out {think Stone Roses and Charlatans UK, among others) and they're not afraid to put on a demonstration. After debuting a few new songs {one of which, a keyboard-driven rock-out, will be appearing on a forthcoming EP}, and a celestial solo rendition of "There's Water Here" by Greg, they launched into "On," which can only be described as pure summertime radiance. The raspy croon of keyboardist Aaron Gilbert paired perfectly with his brother Greg's beautiful vocals, once again confirming my undying faith in the majesty that occurs when siblings join forces to make music together. Aaron worked double duty as a crowd cheerleader, encouraging handclapping and dancing amongst his bandmates throughout the course of the set. "You Wear The Sun" came next, a poppy but slightly aching song that evokes elation with a tinge of sorrow. A particularly rocking rendition of "Stay Where You Are" followed close on the heels of the shimmery "One Night Away." Greg concluded with a gracious adieu before they finished up with the hypnotic grandeur of "Long Time Coming."

But wait… there's more. The showgoers {myself included} hadn't had enough yet, and Delays were happy to indulge us in an all-too-brief encore, one last irrepressibly catchy song that marked the end of this enchanted evening. I most definitely plan to see them the next chance I get and you should too; the brilliance of Delays shines brightest live.