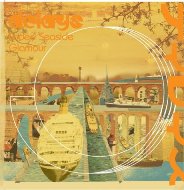 At first listen to the Delays record Faded Seaside Glamour, I thought that the singer sounded just like Stevie Nicks*. Imagine my surprise when checking out the band's personnel only to find there's not a girl to be found in this band. Then I wonder if this some kind of Residents thing in which the singer is hidden from view for artsy purposes. Turns out that Greg Gilbert, the lead vocalist for the band, just happens to possess an amazingly beautiful, but extremely feminine, voice.

Faded Seaside Glamour is one mighty fine debut: gorgeous vocals, jangling guitars, impressive song writing, and striking production. Delays combine a mid-to-late-sixties vibe (think the Association, Small Faces, Chad and Jeremy, and yes, I can hear the Byrds comparisons) with more modern Brit-pop elements that ring in a Travis/Coldplay vein. Their songs possess a emotional fragility that creates a cohesive feel with the current state of British imports, settling them in quite nicely with their contemporaries. One stand-out track, "Stay Where You Are," highlights an almost proggy side of the band that isn't visited elsewhere on the record, a pleasant surprise that keeps them from pigeon-holing themselves as a strictly mellow pop band.

The only thing that keeps me from giving this record an incredible review is that it doesn't push the boundaries enough. It's just a little too safe to make it to the next level. But hey, safe records are nice and who knows what little twists and turns they'll have for us the next time … the next time around… the next time around (my voice is delaying… get it?)

* Now, some people might get the wrong idea and think I'm talking shit by making the Stevie Nicks comparison. But I'm here to tell you that there's not a damn thing wrong with early Fleetwood Mac. I mean, take "Landslide" — there's no denying them, they write quality ballads.