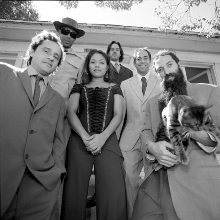 You could tell early on that Thursday, September 29 at the High Dive was going to be a unique night. The usual "fratty" milieu was hanging out alongside Seattle obscure and specialized music fans amidst a few tables filled with nicely dressed Cambodian-Americans smiling widely, out for a happy long night.

Quite a few smart souls stopped partying long enough to catch Plenty Face's opening set — a thin white duke in a cap and green t-shirt with a big bass he played like he was in P-Funk; he shared his rhythm, occasionally his poetry, surrounded by keyboards and noisemakers and vocal tracks. He had a friend hop up on stage and do some spoken word and the give-and-take between them was magical. I don't know what's more adorable: the friendly and handsome Plenty Face, his music, or his dancing with his cutie pie girlfriend (also in a cap) through the next two sets of Long Beach's Dengue Fever.

Dengue Fever's lead singer Chhom Nimol's dramatic but always sweet vocals (mostly in the Khmer language) were just as strong and supple as her James Bond-meets-Cambodian psych-pop band. They were made especially striking by the silently-behest presence of Radar Brothers bass player Sonol and the sinuous six string sprawl of long-bearded Zac. The guitarist really helped kick the party into overdrive with his vocals on "Tip My Canoe" halfway through their set, and it seemed everyone was overcome with joy and awe by Dengue Fever's "groove infection" (argh, I know).

Their material is a toss up between the fun-loving tunes that were popular in Cambodia before the horrors of Pol Pot, and new songs that seem just as great (similar to how British ska bands laced their sets with revered Jamaican classics alongside band-songwriter material).

I must admit, I didn't stay long for the Militant Rhythm Section's set, as I am not a huge fan of mostly-instrumental laptop-led dub {and the fact that ex-Specials (and now Seattle resident!) Lynval Goulding hadn't shown up by several songs into the set}. My one regret in leaving was that I wanted to hear Annabella Kirby sing — her work with Lushy is elegant and grand. You can check out the Militant Rhythm Section over at Purefire.