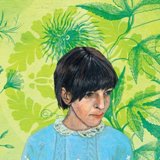 If Songs Could Be Held

On her third full-length record, If Songs Could Be Held, Sub Pop chanteuse Rosie Thomas delivers an honest an introspective record that contains several beautiful songs all sung in a smoothly soft-spoken voice that could give any modern-day diva a run for her money.

With the legions of obsessive fans who freak out over all things Ani DiFranco, Tori Amos, Sarah Mclachlan and other songstresses in the same vein, it's a wonder why Thomas and her golden voice hasn't gathered the same type of following. However, she does distinguish herself from the aforementioned because her songs don't tend to focus as much on the experiences of womanhood. Plus, Thomas not being a national name (yet) makes her all the more special to those who have already discovered her music.

In many ways this is her most accomplished record to date. Thomas' voice never sounded better, but it sure would be nice if she would break away from the sparse arrangements that have been standard throughout her career. This record also marks the first time Thomas has written songs not from her personal experiences, but rather from a fictional viewpoint. It's refreshing to listen to her grow as an artist by taking a different approach toward her songwriting, but it also takes away the personal touch that has made her past albums so engaging and endearing.