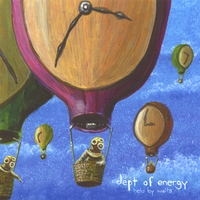 “History’s repeating!” Dept of Energy frontman Robb Benson belts out with full diaphragm control in “Carnival,” one of the indelible pop songs on the band’s first full-length, Held by Waits. But nothing could be less true.

For years Robb Benson has rocked and rolled in a number of projects well-loved in the Northwest: Nevada Bachelors, Dear John Letters, and solo as simply Robb Benson. His voice, nasal and powerful, graces all projects as such a highlight that the myriad songs tend to blur together. Distinguishing certain Dear John Letters tracks from certain others by Nevada Bachelors can be like Jeopardy.

Held by Waits strays from his history and, without implying that any quality is lacking from the past discography, sounds all the better for it. The drumming from Cassady Laton has only improved at pulling the group together, while keys take on a bigger role than in last years EP from Dept of Energy, balancing out what many, including this reviewer, considered in 2006 almost another Robb Benson solo record.

From organ to synth to piano, Ty Bailie lays it on thick and abundantly through tracks like the soulful “The Way You Pictured It” and the dance-rock Franz Ferdinand usurper “Firewall.” Soft electric keyboards back classic Benson guitar lines — Modest Mouse analogy, anyone? — like opener “Scuba” and ballad closer “Stereo Embers.”

And this time, don’t break up.