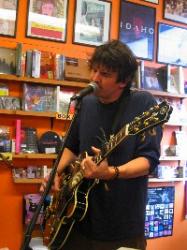 Friday night April 27th was an insanely packed show night for Seattle. From the not-so-secret U.S.E. show at the Comet to Grand Archives at the Crocodile to about a dozen other viable options, a music fan could have entered nearly any venue in town and heard a pretty spectacular night of music. In order to make the most of the evening, I decided to catch not one but two pre-show shows — Cloud Cult at Sonic Boom Records, and Speaker Speaker at Easy Street Records — before ultimately ending at the Croc. Overly ambitious, I know… but some evenings an imaginary girl's gotta do what an imaginary girl's gotta do…

For about half an hour, I feared my three-show night would be foiled. Cloud Cult was late, you see, somewhere en route between Neumo's (on Capitol Hill, the venue where they'd be headlining that night) and Sonic Boom in Ballard (for those of you not familiar with the route, it takes somewhere between 18 and 58 minutes, depending on traffic and the luck of the Ballard Bridge). Just as I was about to leave, they arrived, plugged in her violin and his guitar, and were ready for their set within two minutes flat. Now I admire a no-fuss, no-muss set-up kinda band, so after a glance at the time, decided I'd better pay respects to their lickity-split set-up skills and stay for a few songs.

I didn't leave until they finished their full set — and even then, I stayed later to gush to them about how much I enjoyed their set.

Craig Minowa, Cloud Cult's founder and primary songwriter and singer, played a quiet set featuring only his guitar and lovely accompanying harmonies and violin from Shannon Frid. He started off by explaining the delay; apparently, the full band was set to soundcheck at Neumo's when the soundguy up and quit! So they had to hang out and wait while the venue brought in a replacement. This may have contributed to them playing only six songs during the in-store, but what a set it was! Cloud Cult's lyrics are brainy yet peaceful, bittersweet yet hopeful, and a sense of nostalgia permeated throughout the set. Hearing the songs pared-down emphasized their vulnerability, as well as the exquisiteness of both of their voices; with such minimal, sparse accompaniment, there wasn't room to miss a note — and they didn't. The audience was rapt.

Three highlights for me from the performance…

#1: Hearing the lyrics, "You kiss so deep I could taste you in my toes" from the song "As Long As You're Happy" (from the record Aurora Borealis) pared down for an acoustic set, transforming the song from a toe-tapping pop number to one of heart-wringing ache (as the lyrics indicate it was always meant to be).

#2: "Transistor Radio." The entire song gave me goosebumps. For those of you not familiar with the lyrics, the song tells a tale of a young fella who hears the voice of his long-passed Grandfather, speaking to him through a transistor radio, encouraging him to take adventures and chances and promising him, "Kid, there's something that I'd like to show you." As they encounter each adventure, he keeps wondering when he's finally going to get to his destination… until one day, Grandpa says it's time for him to go find his own way ("And I know that there was something that I wanted to show you, But it's time for you to find it on your own."). The narrator is furious, heartbroken at his Grandfather's apparent betrayal. But then, after time passes, he realizes that his Grandfather did, in fact, show him what he's promised. By the time Minowa reached the final lyrics:

"It's been years since I heard my transistor radio
Yet I keep going to where it seems I'm meant to go
And I finally realized what he wanted to show me
Where I've been, where I am, it's the show."

…I was literally teared up. It was seriously moving.

#3: "Chemicals Collide." My favorite track of their newest release, The Meaning of 8, this song gently spins and ebbs and flows like new romance. While these guys attribute the lyrics to the chemical reactions of the universe and/or psychedelic drug use, I think they're being obtusely non-romantic boys, as these lyrics are clearly documenting the roaring, insane whirl of passionate, volatile, fresh romantic chemistry:

The violin parts made it like, so totally obvious… Stupid boys.

They ended the set with this number, and I was so thrilled with their short yet exquisite performance that I considering canceling all my other show stops for the night and heading to Neumo's. But the lure of catching one of the first Grand Archives shows was too powerful…