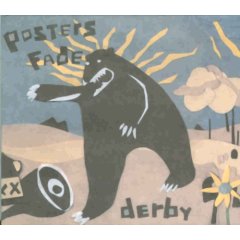 Just because you’re depressed doesn’t mean you have to be all sad about it, right? That seems to be the prevailing sentiment in Derby’s sophomore album, Posters Fade, and the Portland indie-pop trio makes their case effectively. From the inebriant melodies in the opening track’s toast to “the girl that helps you get through it” to the cathartic western slide guitars that kiss the open wound of heartache in the closing track, this record is a perfect pick-me-up to help pull you through those hard day’s nights.

Like Wile E. Coyote on the receiving end of an ACME anvil, the fellows in Derby know how to take a sad subject and turn it into something really enjoyable (from an outside perspective, at any rate). This is not to suggest that the songs are cartoonish or facetious – quite the contrary, in fact. The subject matter is by all means serious enough to be taken seriously, but takes care not to take itself too seriously. The music is a pleasant mixture of quaint melodies and head-bobbing beats, with plenty of ups, downs, and flourishes to give it distinctive character. It’s a study of energy in restraint, with lyrics both sharp and blunt at once.

Derby’s knack for creating catchy hooks is astounding. I don’t think I will ever hear another stomp-clap again without impulsively overdubbing the immaculate acoustic fluttering of “If Ever There’s a Reason” in my head. Crisp, mesmerizing bluegrass-style guitars adorn the simple 1-2 rhythm and gracefully highlight the autumnal lyrics. This song may prove to be an excellent remedy for seasonal affective disorder once the chilly winds roll in again. The post-grunge rushes of distorted guitar in “As My Own” tap my adrenaline every time, and when the riffs drop off into hushed chords and angst-ridden “oohlala” harmonies, I suddenly recall everything I ever liked about the ‘90s alternative era. “All or Nothing” is now so deeply embedded in my brain that I often catch myself singing the line, “’Cause I won’t break, won’t shake, won’t stall, won’t fall” over and over in a mantric loop until it loses all meaning and becomes a conglomeration of incoherent sounds and notes. Even then it’s charming.

The record’s quintessential lyric “Don’t feed the bear, she’ll mess you up” rears its head on two separate occasions – during “Only What She’s Selling” and “Don’t Feed the Bear” (not to mention a third occasion: the album cover). In the former track, slow beats and soft harmonies build up like a gray raincloud for the first minute. Then, slowly, the rain ceases, clouds part, and the gray makes way for small rays of sonic sunshine. Even as Nat Johnson lullabies, “Well, I’ve never been in love / I thought I felt it one time / I was wrong” during the song’s bridge, the backing tunes continue to build to a calming, pleasurable climax. In the latter track, the mood is lightened by handclaps, keyboard melodies, and an assortment of randomly inserted sounds. This song’s whimsical elegance clashes with gloomy lyrics into a bipolar ballad of wondrous irony. Somehow, even in light of dark lyrics, one can’t help but crack a smile and bob a head at this music.

Are you suffering from a broken heart? Has the monotony of wasted hours got you down? Whatever – or whoever – ails you, this record just might be your handy panacea. If you’re having a lousy day, just throw on some Derby and their upbeat songs will have your beat-up heart up and beating in no time.