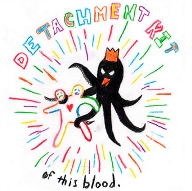 Reviewing music is a tough racket. The daunting task of attempting to translate music — emotion in raw form — into words, to somehow define the essence of the indescribable, is a fruitless one at best. Even if a review manages to somehow accurately capture the mood inspired, that mood is often so subjective as to be meaningless to everyone but the author.

So it sometimes seems that the only way to make a valid statement about an album is to string together a series of descriptors in relation to other previously-understood sounds and somehow encapsulate a personal reaction that is universally understood, that can perhaps reach out to others who have had the same reaction to the same previously-understood sounds. It's an effort that is futile at best (and contemptible at worst).

And sometimes, as if those challenges alone weren't enough, along comes a band like Detachment Kit to obtusely defy any boilerplate reviewing tactics, by refusing to emulate any other band — I could tell you they sound sort of like The Dismemberment Plan, except that The Dismemberment Plan is really irritating while Detachment Kit is not; I could even get all crazy esoteric and claim they are reminiscent of the first Skeleton Key record, but that doesn't even make sense (for the record, though, I stand by the sentiment) …

… or even to stick to a consistent sound. I could mention the cornucopia of instruments played (including but not limited to xylophone, cello, Theremin, and trumpet), but then you might think they were one of those bands, supplanting variety for real talent by showboating their crazy non-rock sounds (such is not the case — every use of a nontraditional rock instrument is seamless and effective).

I could try to splice together some genre types (maybe they were once emo but then met the love of their life? Or perhaps they aspire to someday be prog but haven't quite mastered the grandiosity, the inhumanity, or the math) and pepper that explanation with the exceptions they make to the rules that they write, but that would be far too intellectual a task for such a spirited release.

The only aspect of this album that I really feel comfortable spouting off about is the imaginative cover art. "of this blood." s presented in full-spectrum Crayolavision. Beyond the awe inspired by the sheer effort of the presentation is the sublime pleasure of playing the board game inside — this band really wants you to feel good.

I give up. I don't know what to say about this band. Just buy the album. Oh, and go see them at Neumos on May 26th with The Lights, The Fitness, and Hint Hint and then it won't matter that I couldn't review them because you'll just know.