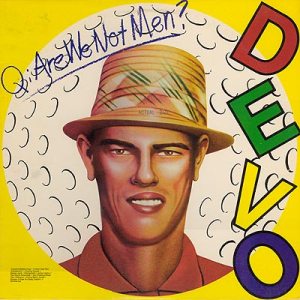 Devo rhetorically asks: Are We Not Men?

The question of the night was obvious: Are we not men?

Of course the answer was: We are Devo.

Sunday night at the Moore Theater was packed for Devo, the remarkably-influential new wave band from Akron, Ohio who was playing their debut album from 1978: Q: Are We Not Men? A: We Are Devo from beginning to end. The following night they are playing their album Freedom of Choice in its entirety.

When my friend and I had gotten to the Moore, the place was packed and full of people anxious to see the band. A very large number of people were wearing the trademark “energy dome” hats (which were sold at the merch table for $30 and I bet they sold a ton, including one to my friend; $17.99 on Amazon). Strangers were approaching one another and asking “are we not men?” and I (over)heard more than a few people boast of dressing as Devo for Halloween the previous weekend. This was a crowd very excited to see this band.

The show was delayed a bit and roadies were in the middle of the sound check when we found our seats. Devo wouldn’t come on until about 9:15. When they did, they opened their set with some music videos, one was to their cover of the hit “Secret Agent Man” and the second was of “Jocko Homo”, the track from Are We Not Men? That rhetorically asks and answers that very question.

When the five members of Devo arrived on stage (which was covered with a green tarp), they were in their custom, somewhat tear-away, Devo hazmat suits and brought a lot of enthusiasm that continued throughout the set. The lineup of Mark Mothersbaugh, Bob Mothersbaugh, Gerald Casale, Bob Casale and Josh Freese, if you imagined them outside of the bright yellow hazmat suits, would look like a group of bankers: older, balding or graying and white, but they still brought a lot of energy to the night. My friend whispered to me a few minutes into the first song (“Uncontrollable Urge”) that “they look really old but can still rock”. Of course it was true (they were playing an album released a year before I was born), but without allowing any curve, they played remarkably. When they stripped off the hazmat suits, it did seem to be a bit of a struggle but it fit with the awkward dances they performed most of the night.

The highlights included the weird cover of The Rolling Stones’ “Satisfaction” and the even weirder (in a good way) “Space Junk” which Mark Mothersbaugh said was “ripped straight from the headlines” and paused to fill in “in the Akron Beacon Journal” and then paused again before adding “in 1975.” The crowd was excited throughout the night, give and take an hour before and after Devo’s set, but they were positively electric for “Jocko Homo”.

The finished their set with “Shrivel Up” (it was the last song on Are We Not Men?) and then returned for their encore to finish with “Smart Patrol/Mr. DNA” and curiously a song from Freedom of Choice, “Gates of Steel.”

When we were exiting the Moore, we ran into several friends and everyone was buzzing with how enjoyable the show was. No one really wanted to go home; several people wanted to get their picture taken in my friend’s energy dome.

The following night, Devo is playing Freedom of Choice (which includes their most well-known hit, “Whip It”) and I left the show more, not less, jealous of the people who would be at the second show.