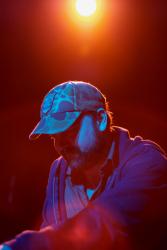 I have to admit, I was a little apprehensive about the new year's eve lineup at the Showbox last week. Having never seen DeVotchKa live, I knew I was in for a treat; and Norfolk & Western have long since been one of my best friend's all-time favorites. But Kid Hops? It just didn't seem to match. There had been some rumors afoot that he got the party started right when he performed outside the box of his weekly KEXP reggae-centric show, so I was cautiously optimistic. But there was still a part of me wondering if it would all match.

Was I ever wrong. I am here to report that Kid Hops does, in fact, rock the West Coast Party. His progressive, smooth beats had even the most cement indie-prone feet dancing, and he also managed to create a little magic, at least for me: I suddenly realized that I was ringing in the new year at a killer show, with good friends, shooting for this site, dancing. It set off a gleeful, sparkly, super-fun tone for the rest of the night.

Norfolk & Western, as we tweeted and shouted to each other throughout the set, might be one of the tightest, most seamless bands I've ever seen take a stage. That's not to say that plenty of bands aren't fluid, or do their fair share of practicing. It's just that these folks must be doing something outside of that, like sharing a home. Their intuitive response to each other's direction throughout every song was tangible and impressive, and left us reeling. Had they played two hours and headlined the night, it would have sufficed.

And then, DeVotchKa. Glorious, tuba-wielding, epic DeVotchKa. It was one of those sets I went into knowing that it would be good, being a newer fan and somewhat familiar with the albums, and riding on everything I'd read and heard about their live performances. But none of that could have possibly prepared me for the level of swoon that commenced as they began to play. It seemed then, and still now, completely impossible that so much could be pouring off the stage and through the speakers from four people. Four. If I closed my eyes (as I did, a few times) I would have sworn there were a dozen performers in front of me, for the sheer amount of energy and orchestral bliss that was created.

I fell completely, totally, head-over-heels in love with DeVotchKa. Not with the lead singer, not with the drummer, not with the tiny lights strung inside the tuba — but with the thing that happened when they began to play. I mean, seriously. At one point, as I was shooting the first few songs, my knees actually went weak during a particularly sweet spot during "Queen of the Surface Streets". It was amazing.