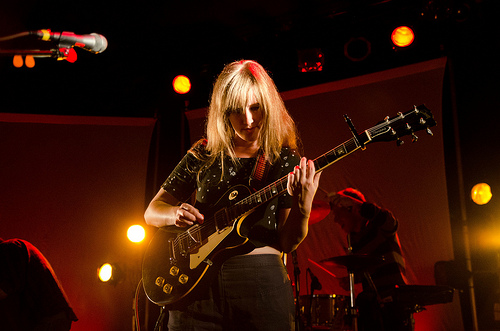 Dirty Projectors bring their gorgeous harmonies to the Showbox

Monday nights can be a little hit and miss as far as shows go: crowds can often be worn out from the preceding weekend — in this case, that weekend involved three days of Block Party goodness — and occasionally reluctant to venture out again for yet another show on Monday. That was certainly not the case with Wye Oak and Dirty Projector’s show at the Showbox this past Monday night.

Wye Oak opened up the evening to an already fairly crowded Showbox. The duo of drummer (and occasional bassist) Andy Stack and guitarist Jenn Wasner made enough noise that you have thought you were listening to a much larger band. Maybe it was the sound capacities of the Showbox on this particular night, but even if not, Wye Oak is much, MUCH louder and heavier live than their recorded version is. Wasner’s guitar playing often created a punishing wall of sound, with her vocals just barely lifting over the top. Their moody and contemplative sound harkened back to some of the shoegaze bands of the early 90s. This was my first time seeing Wye Oak, and I was certainly impressed.

Dirty Projectors took the stage to an anxiously excited crowd, with lead singer David Longstreth high-fiving audience members in the front row upon entrance. The first twenty-five minutes of their set consisted of songs from their new album, Swing Lo Magellan. That fantastic new material punctuated their setlist, as they played the majority of the twelve songs on the album, with highlights from their 2009 album Bitte Orca interspersed throughout.

One noticeable difference between the current incarnation of Dirty Projectors and previous ones is the adjusted lineup. While most members remain the same, former drummer Brian McOmber left the band on amicable terms and was replaced by Mike Johnson. More noticeable however, is the absence of Angel Deradoorian. The trio of Deredoorian, Haley Dekle, and Amber Coffman made some of the most unique and gorgeous melodies in indie music — however, Deredoorian left the group earlier this year to pursue other projects and was temporarily replaced by Wye Oak’s Jess Wasner, who has since been replaced by former Chairlift member Olga Bell. Considering some of the harmonies and offbeat timing involved in playing their songs live, Bell did a fantastic job and certainly held her own with the rest of the band. When the three of them harmonized together on songs like “Useful Chamber”, they didn’t just settle for singing their beautiful melodies in perfect harmony, they did so at full volume. Not only were they all perfectly on-key, they absolutely belted those notes as loud as they could, and the audience loved every second of it. I noticed several people around me turn to their friends with that "wow, that sounds fucking amazing!" look on their face.

Also of notice at this show was Amber Coffman’s guitar work. While past Dirty Projectors shows featured Coffman playing guitar in small spurts, it mostly featured her playing more simple melodies and chords, with Longstreth doing the majority of the heavy lifting. Since the last time I saw them at Neumos in 2009, Coffman’s guitar skills have gotten considerably better and she now plays a lot more of the intricate guitar picking parts than she ever did before.

I think it’s safe to say that everyone in attendance Monday night was more than happy they'd made the trip out for such a fantastic show, from two great bands that really seem to be hitting their respective strides.

{All photos by Beth Crook.}