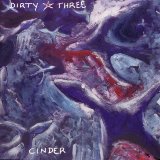 Australia's Dirty Three isn't the type of band that you memorize song titles to and then email your local college radio DJ's about. No, they are more the kind of band that you put on late at night while you are downloading the latest episode of "Lost" on your iPod, checking your email and finishing off that last bit of stale red wine.

Their classically-infused rock instrumental pieces can serve just as perfectly for setting a romantic mood as for commiserating a heart-wrenching breakup. There is genuine feeling in the violin playing of Warren Ellis, which with the accompanying fuzzy guitar and inventive percussion of Mick Turner and Jim White, respectively, always seem to strike the right chord.

Don't toss Cinders, the band's seventh release in fourteen years, on your player casually. Rather, it should be eaten like a five-course meal in mid-summers evening; that is, it's meant to be enjoyed as a whole, not in parts. The record is a reflection of finer refinements and indulgences: dark chocolates, dry wines, stinky cheeses and stout beers. This is the real thing.

Cinder, was recorded in the space of ten days with Casey Rice (Tortoise, Gastr de Sol, etc) in Melbourne. It feels more casual, more at ease than some of their prior efforts. Not to say that they could ever be accused of being uptight; it's more that they are now completely comfortable in their own skin and are open to letting things just happen — perhaps not in such a controlled environment.

In preparation for this record, Ellis and company, who now live on three separate continents, wrote an impressive catalogue of nearly 40 songs, which were then whittled down to 25, of which 19 made it's way onto this record. Along the way, they were able to connect with long-time mates and collaborators Chan Marshall (Cat Power) and Sally Timms (Mekons), making this the first Dirty Three record to feature vocals. While the Chan Marshall's number is, needless to say, quite enjoyable, I was less taken with Timm's contribution. Not that this is any of her fault, mind you. I'm quite certain that when she entered the studio, Ellis and Casey Rice probably just instructed her to "sing something ethereal." So she did. I would have liked more, that's all I'm saying.

If you aren't already a fan of Dirty Three, and you are tempted to check them out, I would say that Cinder would be a good starting point. There's enough variety to keep the novice D3 aficionado from boredom. And, if you ever get a chance to check them out live, I would urge you to do so — they put on one of the most riveting live performances you'll likely ever witness.