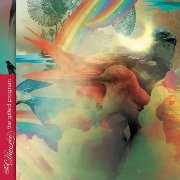 The last time I was in Seattle, about nine months ago, I found myself in the Crocodile, ready to see the Divorce for the first time. I knew their record (There Will Be Blood Tonight) well, and loved it something awful. It's a really beautiful, destructive pop record. And I enjoyed the hell out of the evening.

So, naturally, I did what I could to make sure I would review the new Divorce record as soon as I could get my paws on it. And I'll tell you what, dear reader, at first I thought, "not a single track on it like 'The Man Moan'" (but read on, oh dear pessimistic reader, read on).

This was disheartening at first. Very disheartening. But once I listened to the fucker straight through, I realized that it was a really good album, and that my head was bobbing and legs bouncing the whole time. No more of this kickass-song-after-kickass-song crap, but rather The Gifted Program is a whole album that fits together quite nicely, to make, somehow, a fantastic rock record, fitting nicely into a "Made in Mexico Records Royal Triumvirate," alongside Dolour's New Old Friends and The Catch's Get Cool.

There Will Be Blood Tonight had a rawness bred in basements and algae, whereas The Gifted Program takes a step into a new direction. The production is, maybe not better, but rather cleaner, and the addition of another guitarist is clear. The Divorce is a band band, complete with piano chords coming out of nowhere for the bridge of the anthem ("Birds=Magic") and phrases like "stillborn fantasies" (on "Call the Police").

And you know what? I looked at first for that riff, one like that on "The Man Moan," and I neglected to skip ahead to the lead guitar line on "Call the Police," where the guitar solo tears apart the threads of the song in just the same fantastic way I wanted on my first listen.

The Gifted Program (as cliché as it sounds in the context of reviewing a band's second album) is a symbol of the maturation and progression of a confident, competent band. And more than that, simply put, it is very good. In fact, it is better than There Will Be Blood Tonight.

(Bet you weren't expecting that, were you? Well, it is.)

"Doctors and Friends" is a BIG song, with layers and subtleties combining to create an arena-rock orchestration — a song that leads fantastically into the terribly wonderful, tension-filled guitar lines and lyrical melodies of the next track, "Air Traffic Control," as well as the rest of the tracks on the record: Notably, the very-Divorce-esque "Deny! Deny! Deny!" that would easily have been one of the better tracks on There Will Be Blood Tonight and ….

And then there's "Fishing with the Party Sharks," the song I finally found, the song were thinking I might not find. At the tale end of the record, of course, "Party Sharks" has a riff comparable to "The Man Moan," and listening to it I found myself suddenly sinking into a pool full of Party Sharks, drowning somewhat joyfully, in metaphorical streamers and kazoos that made sounds of electric guitar.

Thank goodness for "Fishing with the Party Sharks." I was such a fan of the first record, and such an even bigger fan of "The Man Moan" that not having another riffy, hard hitting, gravel-loaded dump truck of a song, well, that would mean even though I still really enjoyed the record, I felt like I was missing something. I would feel like the kid at Christmas who gets everything on his list, verbatim, only to realize I didn't ask for batteries and thus can't play with anything.

And even though The Gifted Program comes with plenty of batteries (read as "plenty of power," Dear Reader) it would still exist perfectly without that Shark-Party riff as a fantastic record, another notch in the Made in Mexico Belt of Super-ness.