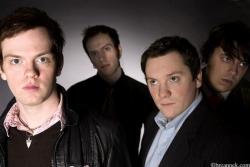 June was a difficult month for fans of Seattle music. Pretty Girls Make Graves, Argo, and now the Divorce all played their final shows that month. Fortunately, it’s now early July and, hence, we’re in a new month. I know of no final shows this month — and want to keep it that way.

Like PGMG, the Divorce played two final shows on the same day, an early show for all-ages and a later show for 21+ crowds. On this unusually warm Saturday evening, I caught the former. This show was a love fest for virtually everyone involved. Both opening bands, Portland’s Crosstide and Seattle’s Sirens Sister, gushed about their love for the Divorce nearly every chance they got. Most stories involved sleeping on one another’s couches. Sirens Sister frontman Zach Davidson said that he was at the very first Divorce show. At one point, one of the members of Crosstide rhetorically asked if they could play all their shows with the Divorce, before answering that the answer is, sadly, no.

All-ages shows at the Crocodile are interesting because the show room is divided down the middle and each half has an equal view of the stage, unlike, for example Neumo’s or the Showbox, where the drinkers are further away from the action. Because this was the earlier, all-ages show, the 21+ section was much less crowded. The Divorce has quite a few younger fans, and they were at this show in full force. One young woman even brought a bouquet of flowers for lead singer Shane Berry. When the lads from the Divorce took the stage right about 7:00, their set was preceded by a montage of photos of the band, from their childhoods to the present and set to the music of “Still Crazy After All These Years.” It did give the show a sense of proportion for the occasion.

When they started playing music, they began rocking right away. They mostly eschewed the ballads in favor of the more traditional rock songs, and to great effect. The band played a generally even mixture of songs from its two albums, 2003’s There Will Be Blood Tonight and 2005’s The Gifted Program, as well as songs from In Arms, which was a forthcoming record until plans for its release were scrapped when the band decided to disband. Those songs are, however, available for purchase on their MySpace page.

If I counted correctly, the band played 15 songs altogether and the crowd grew significantly by the minute. The set was generally pretty tight and playful. The band did not give off the impression of still being friends and enjoying each other’s company. Bassist Jimmy Curran joked at one point that he dreamt that that he and the other band members kicked Berry out of the band and replaced him with Tyra Banks. The only technical hitch came about half way in to the set when lead guitarist Garrett Lunceford’s amp went down and lost sound from it. Berry quipped that this was the last time this audience would see his band and “you’re going to remember us as bunglers.” They probably lost time for one song, but all was quickly forgiven when they broke into “Yes!,” the catchiest song from The Gifted Program.

Time constraints forced the band to end around 8:15 and even though the audience shouted “one more song!” after the band departed the stage, no one felt cheated or let down. The only disappointment was that this was likely the last time anyone would see this band play again.