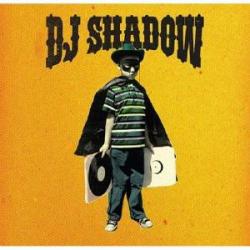 Watching Lucas McFadden and Josh Davis, aka Cut Chemist and DJ Shadow, spin records is like getting a tutorial in turntablism from two experts of the genre.

On Sunday night they were in town to perform their latest collaboration, The Hard Sell. And for about two hours it really was an intense experience, watching two of the most skilled scratch DJs around do exactly what they do best. The “rules” the adopted for The Hard Sell were similar to their legendary Brainfreeze and Product Placement collaborations and spelled out in a funny instructional video before the proper set: only original pressings of 7” records would be used, no other instruments, all loops are to be done in real time, and the set was to be filmed and broadcast over a screen behind them to keep Chemist and Shadow honest, I presume.

As the video explained, the use of only 7” records is especially impressive because they are spun at forty-five rotations per minute, allowing less time to scratch at the proper moment or mix and the traditional albums are usually 11 or 12” in diameter, leaving much less room to grab the record.

But what makes Shadow and Chemist such great collaborators is that they both possess an encyclopedic knowledge of music over the past 50 years or so. Many of the records they sample are easily recognizable (Queen, Public Enemy) and others are wholly obscure. Some selections are bizarre – one sequence included the theme to “Gilligan’s Island” recorded or mixed to the music of “Stairway to Heaven.” Did Tenacious D ever make such a recording? In his introduction to the set, Shadow warned us not “to take this shit too seriously.” Yet somehow they managed to make a transition from Spanish bullfighting song into a loud rock number sound seamless. At another part in the set, I could have sworn I recognized local hip hop group Dyme Def, but I don’t think they have released anything on 7” vinyl.

At the beginning of the set, Shadow said he has been playing shows in Seattle for 11 years and they have always been at the Showbox, with the exception of the one time he played at Aerospace (which is, of course, now where Neumo’s sits). He also introduced his partner as "the real star of Juno". Cut Chemist does have a small role as a teacher in the Oscar-nominated film.

There were two moments were either Chemist of Shadow erred by missing the right beat for a moment but overall it went pretty smoothly. After the first error, Shadow joked that they should be treated like circus animals and redo the trick from the beginning. I’m not so sure many would have noticed if they hadn’t stopped the action. Still, with 8 turntables and countless record changes (and lord knows how many scratches) between the two, they’ve got a pretty damn good batting average.

What made the show most enjoyable for me was watching the two DJs work outside of genres. Refusing to be pigeonholed in one field or another, their song selections were all encompassing, including elements of hip hop, classic rock (segueing from Jefferson Airplane’s “Somebody to Love” into the Doors’ “Break On Through” late in the set), soul, funk, pop, disco, doo wop, and dozens of others. Just before the end of the show, one of the DJs told everyone that this tour was something they hadn’t seen before: all vinyl (Kid Koala opened the show and he spun all 33 1/3 records), which probably is not true, but one thing they did do that I hadn’t seen before was for the second to last “song” they played: Shadow and Chemist both wore turntables around their necks and switched records and mixed them accordingly. Yes, they wore turntables like Flavor Flav wears clocks.

For two hours, DJ Shadow and Cut Chemist entertained a sold out crowd at the Showbox. The room was too packed to for anyone to really dance, but that was of no worry. Sometimes it’s better to gawk in amazement and wonder “did he really just play what I think he played?” anyway. It was a night that could inspire someone to try their hand at turntablism and crush the dreams of greatness for hundreds more. They made it look easy and impossible at the same time.