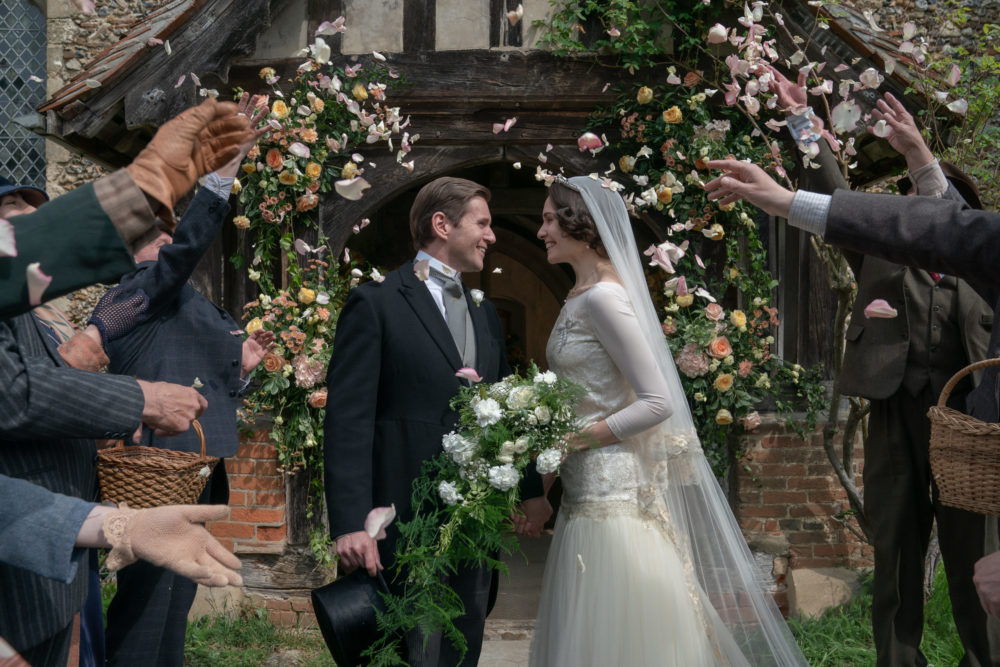 The follow-up to the big screen debut of DOWNTON ABBEY is finally on physical media!  DOWNTON ABBEY: A NEW ERA, Directed by Simon Curtis, can now be added to your collection of period dramas on 4K Ultra HD, Blu-ray, DVD (and yes, digital. If that’s your jam). The special features include a bunch of featurettes with cast and crew, and commentary by Curtis. There’s even a limited edition gift set that has postcards, a photo book, and a collectible steel tea strainer (oooooh!).

A NEW ERA opens in the most perfect way: showing the wedding of Tom (Allen Leech) and Lucy (Tuppence Middleton), complete with Mrs. Patmore and Daisy judging the lunch spread. Shortly after, the Dowager Countess of Grantham (Dame Maggie Smith) calls her lawyer to Downton and reveals that a mysterious man from her past – the Marquis de Montmirail – has left a French villa to her,  which she is now gifting to Sybie (Tom & Sybil’s daughter) so she’ll have “something of her own.”

After that shocking revelation, the Crawleys receive a request from a film studio wanting to rent Downton for a silent motion picture set. The Earl of Grantham (Hugh Bonneville) says NO, but he’s quickly overruled by Lady Mary (Michele Dockery) who accepts because they need the money.

And from there, the film divides the family by sending Robert, Cora, Tom, Lucy, Lady Edith, and Bertie to the South of France at the invitation of the deceased Marquis – whose mom is apparently pretty incensed about him leaving the villa to Violet. Ms. Baxter, Mr. Bates, and Mr. Carson (due to a very wise suggestion by Mrs. Hughes), go with.

While that drama plays out, the film crew arrives at Downton leaving Lady Mary and the rest of the staff to swoon over movie stars Guy Dexter (Dominic West) and Myrna Dalgleish (Laura Haddock). And the Director, Jack Barber (Hugh Dancy), to swoon over Lady Mary! (Husband Henry Talbot is absent, apparently racing cars). I greatly enjoyed watching them film a movie within a movie, and the very SINGIN’ IN THE RAIN plotline that followed.

Since this is Downton, there are a bunch of side stories happening including Violet dividing up all her earthly belongings (YOU KNOW WHERE THIS IS GOING!); Cora’s health issues; silent films vs. “talkies,” and Daisy’s awkward family probs. And what’s this? Is Thomas Barrow actually going to get his happy ending? I will say nothing more.

I am absolutely soft to the core, so of course I cried every time there was a reference to things past, someone’s health was failing, a kiss happened, they showed the adorable children, or they mentioned someone who died. So, LITERALLY THE WHOLE MOVIE.

While I don’t think A NEW ERA quite lives up to the rest of the series/first film, it’s always so nice to see old friends again! Also honestly refreshing to see Bates and Anna just be like, HAPPY. As far as all things DOWNTON goes, this wraps up things nicely, and I think fans will enjoy it.