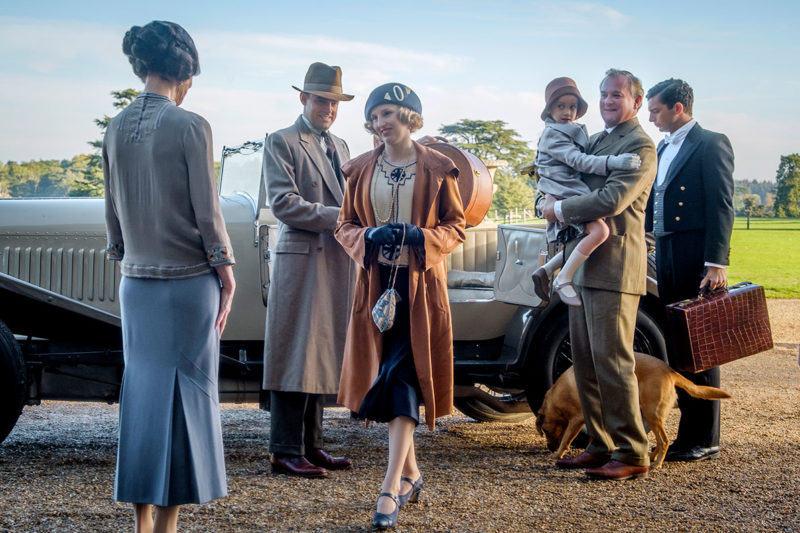 Has it really been FOUR YEARS since we’ve seen our beloved Crawleys and their equally beloved downstairs staff? The Downton Abbey movie starts with everyone just as we left them, jumping just slightly ahead to 1927, with news of an unexpected and very exciting overnight visit to Downton by King George V and Queen Mary!

Listen, as soon as that familiar theme music started to swell I knew I was in for it. And I was SO READY for all the ups and downs of this family packed into a two-hour film, and THOSE COSTUMES. OMG those costumes.

Anyway, let’s catch up! Upstairs, the Earl and Countess of Grantham are happily enjoying their children and grandchildren; Lady Mary and Tom Branson are still splitting all of the household and village management duties; Lady Edith is still … Edith’ing — like, honestly, she’s at PEAK Edith here; The Dowager Countess is still Queen of conspiracy theories; and Isobel is enjoying her new life as a Baroness. And also OMG THOSE COSTUMES.

Downstairs, Thomas Barrow is now in charge — and of course, loving every minute of it; Daisy is still helping Mrs. Patmore in the kitchen and also putting off her wedding date to Andy, like, constantly; Mrs. Hughes is enjoying (?!) married life with Mr. Carson — who isn’t exactly leaning into retirement (shocker); Anna and John have a little one (EEEE!); and Miss Baxter still inexplicably seems to have a thing for Molesley — who now works as a teacher in the village.

Naturally everyone is amped up about the royals coming to visit, especially Violet, since Queen Mary’s Companion is also Robert’s cousin, Lady Bagshaw. Seems the two ladies had a falling out years ago when it was made known that Lady B wouldn’t be leaving the family fortune to Robert, the rightful heir. In fact, she’s planning to leave the whole estate to her lady’s maid. CAN YOU IMAGINE?

In the meantime, Lady Mary is running around stressed the F out with all the royal parade and household preparations and Tom is being followed by a mysterious man who keeps bringing up his rebellious Irish past and questioning his loyalty to the King. And Edith is still … Edith’ing. Life is very, very hard when you’re forced to throw parties all the time and live in a mansion, I guess.

Everything is going great in the servant’s world — until Mary decides Barrow isn’t up to task and brings Carson back in to get things in order (don’t worry, Barrow has his own excellent adventure that brought many, many tears to my eyes). Then just when things start getting settled and Mrs. Patmore has created the perfect meal plan, the royal servants swoop in and take over the entire house, bringing a snooty French chef!

But if we’ve learned anything from all those seasons of watching Downton, it’s that everything will work out just as it should. There will be drama, and intrigue — and even a little danger. There will be laughter and tears, and as always, a grand scene with 100 ball gowns to die over (HI DID I MENTION THOSE COSTUMES?!?!). And dear, salty Violet will get plenty of zingers in, including my favorite delivered with a dry snarl, “Sarcasm is the lowest form of wit.”

This movie is the perfect end to Downton — everyone gets their moment, and all of their stories wrap up in a way that I loved. Of course I would love it if they did another one, but I’m also happy if this is the last thing we ever get.