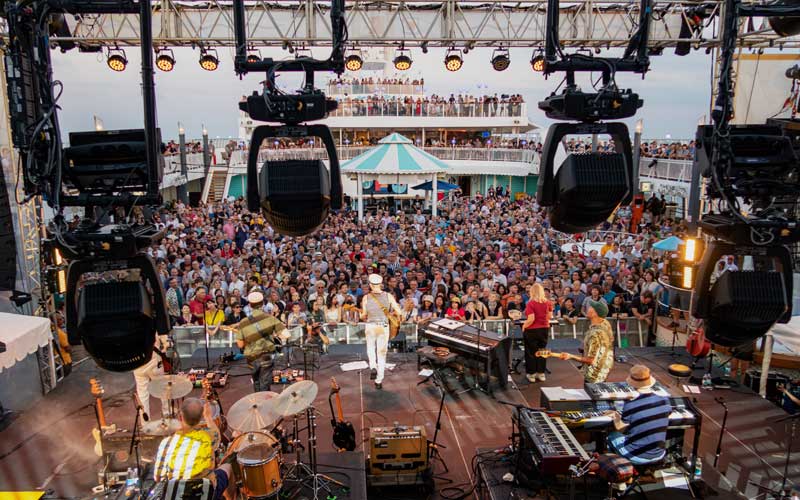 Interview with a Boaty Weekender! Find out what it’s like to cruise the Mediterranean with Belle & Sebastian and Friends

In early 2018, the Belle & Sebastian {B & S} folks asked everyone to complete a  survey (and a polite one at that). They were looking for input on entertainment and travel ideas for the Boaty Weekender – a cruise featuring sets by Belle & Sebastian AND B & S fans’ favorite bands AND assorted twee-ish related activities.

Although I was pretty sure I couldn’t join what was the most tempting music festival on the high seas (ever), I personally took great care in completing the survey – which basically involved me daydreaming about which B & S-adjacent bands I’d want to be (trapped) on a cruise ship with and what kind of fun adventures I’d like to have with said favorite bands. It was a super fun exercise that had me fantasizing about seeing folks like Martha, Bis, and Ballboy performing on the lido deck while Tacocat and The Beths took over the boat’s ornate theater. Oh, and is that The Pastels over on the captain’s deck? YES, PLEASE!

A few months later the line-up was announced – and although it didn’t include any of my suggestions, it did NOT disappoint. In August 2019, B & S and Friends took to the high seas to live their best indie-life on a cruise from Barcelona to Sardinia. The four days of music and BINGO games and a margarita tasting and yoga made me feel some serious FOMO (check out that day by day schedule!).

The best antidote was to find out that our dear friend and TIG contributor, Imaginary David and his wife were going on the Boaty Weekender 2019 (and to celebrate a wonderful and momentous occasion, no less)! And we were extra delighted when he agreed to share his onboard intel and his beautiful photos with us!

HUGE THANKS to David for kindly answering our questions!

TIG: What were the bands you were most excited about seeing?

David: The Boaty Weekender was conceived, designed, and executed by Stuart Murdoch of Belle and Sebastian. Belle and Sebastian was the main draw for people who came from all over the world. I like them, but honestly they were #4 on my priority list.

#1: Alvvays. My wife Carolyn and I love this band. In November of 2018 we brainstormed ideas for our second honeymoon to celebrate our 30th anniversary. After a couple rounds of wine ideas started flowing. We saw Alvvays in the Boaty lineup knew we had to go! It was also a great excuse to visit Barcelona. We booked in that moment, which was a little tricky given the wine situation.

#2: Camera Obscura. This band has meant so much to me, especially in the Let’s Get Out of this Country era (2006/2007). When keyboardist Carey Lander died in 2015 the band stopped recording and playing shows. It was a dream to see they were reuniting for the Boaty. They played three sets, and I could see from the tears of joy in the crowd that it wasn’t just me who was thrilled to be there.

#3: Japanese Breakfast. I love the energy this band brings to their shows. Their 2018 Sasquatch set was phenomenal. Also, who has had more impact on American culture in the last couple years than Michelle Zauner? Have you seen her fashion creations and modeling in Vogue and Glamour? Have you read her incredible Crying in H Mart story in the New Yorker? She’s now expanding that story in a book I can’t wait to read. You’ve seen the video she created for her song “Boyish,” right? What about the videos she made for two of the hottest bands of the year: Charly Bliss and Better Oblivion Community Center? She does it all very well.

Were there any surprise favorites on the bill that you hadn’t listened to before but ended up loving?

Cruises are known for their copious and lavish meals. Were there any dishes that were “Boaty Weekender” or Belle & Sebastian themed?

I didn’t see any specially-themed dishes, though the ship has a lot of restaurants and I may have missed something. Most of our meals were at a 24-hour buffet that was anything but lavish. One evening we ate at the Italian restaurant, which was good, but the amazing thing was that from our window seat we saw a dozen dolphins leaping from the water. The show went on for about 5 minutes before the ship pulled too far ahead.

The best meal of the cruise was when we got off the boat for a day in Cagliari, Sardinia. We had a late lunch at a nondescript restaurant that made to-die-for pasta.

Wait. The fruit and chocolate that appeared in our suite each night was lavish and the perfect way to end each day.

As the hosts, were members of B & S everywhere or did they just show up when they were on the bill?

I saw members of almost all the bands walking around continually. They watched shows alongside everyone else. They sang karaoke. They too looked a bit disheveled by 1 AM. They gawked at the spa where Botox treatments were available. They were gracious when fans asked for a quick selfie and/or awkwardly gushed.

Dave Depper from Death Cab for Cutie recently tweeted a sentiment about Alvvays that I share completely. 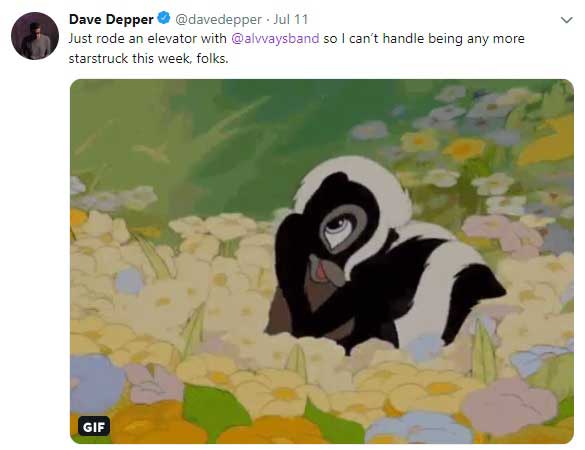 Molly Rankin from Alvvays walked past me twice before the ship even departed. Twice later as I was hustling from one stage to another on a lower deck she passed me going the opposite direction. Moments like these were surreal. I was too paralyzed to say anything.

Were there any wacky things you saw going on that made you feel like you were in an episode of The Love Boat?

Ha! Carolyn and I talked about The Love Boat, and how that TV show left out the long lines, room keys not working initially, lugging luggage, and expensive drinks.

But yes, the cruise was filled with heart-warming moments: people obviously in love and fully living in the moment, people incredibly happy to see their favorite bands, and truly remarkable sunrises and sunsets. Tracyanne Campbell from Camera Obscura asked from the stage “Is everyone having a lot of great sex?”

A young couple from Brazil sang and danced to every band, often right up front. They were so much fun to watch.

I swear half the ship’s crew knew our names, just like on The Love Boat. That was more unnerving than wacky.

What were your 5 favorite moments from the trip?

This is hard. In no particular order:

Are there any other bands for which you would sign-up to travel on one of their band-themed cruises?

I’ve read about other music cruises, but without naming names none had as strong a lineup or seemed worth the time and expense.

Huge name artists could be fun, but it’d be impossible to get tickets for the Bruce cruise.

Record labels including Barsuk and Merge have put on music festivals featuring their bands. A Polyvinyl cruise would be fantastic.

Any band or fun surprises not on the schedule?

Mid-way through the cruise we docked in Cagliari and broke into groups for various day-trips. Carolyn and I went to Barumini, a city built of basalt starting in the 17th century BC. Archeology was the perfect way to take a break from the rock shows.

Any word on whether the BW is going to happen next year? Are there any bands that you think would be a good fit for next year’s line-up?

Stuart Murdoch hasn’t ruled out another Boaty, but I doubt it’ll be next year given the logistics. I do believe it’ll happen again at some point. Reviews were very positive:

Stuart has tweeted about curating a music festival in Mexico next year. I am keeping my eyes peeled.

Are there any other fabulous or funny or notable details I forgot to ask about?

The Boaty encouraged everyone to dress in a nautical theme for a day. Carolyn and I wore matching sailor shirts and scarves. At an autograph event Michelle Zauner from Japanese Breakfast said that we looked “adorable.” It was a moment.

Each morning a yoga session was offered on the pool deck. I didn’t go, but when walking by I overheard the instructor Frances McKee from The Vaselines leading mass flatulence. That was peak Boaty.

Molly Rankin talked on stage about how some of their songs are about drowning. Then she told us about a time when she was on a boat in a storm and a nearby boat sunk killing some of the occupants. This evoked nervous laughter from the crowd.

Donna Maciocia was fantastic playing keyboards and singing backing vocals for Camera Obscura. She blew the intro to “Hey Lloyd” at two of the three shows, but the loving smiles that drew from her, the band, and the crowd made those moments even better.

The first Teenage Fanclub show was exceptionally loud. I started out front and center then tried further back and then up on the overhanging deck. But it was so deafening I had to leave. That was a shame.

British Airways had to cancel flights the day before The Boaty. Both Camera Obscura and Belle & Sebastian were flying from Glasgow to Heathrow then down to Barcelona. Both bands had their second flights cancelled and had to get new flights and a car ride to Gatwick. Bags with guitars, keyboards, and pants were lost. Camera Obscura arrived after the scheduled Boaty departure, so the sailing was delayed by two hours. All of this was recorded in the moment by the bands on twitter, and it was hilarious if harrowing.

We had never been on a cruise before because we assumed the experience would be bad, but our room was great and more importantly the shower was wonderful! So if that’s what’s holding you back…