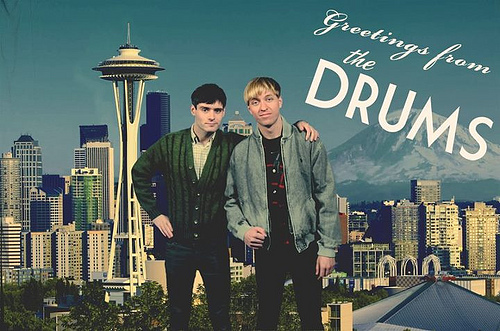 Seattle {by way of California} band Craft Spells took the Neumos stage a little before 9p to a packed and anxious all-ages audience this past Wednesday night, and they certainly did not disappoint. Between songs from their fantastic 2011 debut album Idle Labor, they mixed in some new material from their brand new EP Gallery, which comes out to next week.

My introduction to Craft Spells came at last year's Bumbershoot festival, where I was fortunate enough to catch their early afternoon set — and I was immediately hooked. The songs were solid and catchy as hell, although they did seem a little tired and sluggish at the time… could have been just that early time slot. With that said, somewhere in the past 8 months or so their energy and confidence have picked up immensely: lead singer Justin Vallesteros was bouncing all over the stage, even stage diving-while still playing his guitar during their dance friendly closing number "From the Morning Heat." They even got a few screams from the crowd when they broke into their most recognizable song to date "After the Moment."

The Drums then took the dance party baton from Craft Spells and ran with it. Lead singer Jonny Pierce set the tone by enthusiastically dancing through each of their songs, at times moving and swaying like a young Morrissey. Pierce seemed impressed by the liveliness of the young and energetic Seattle crowd, at one point commenting, "You guys are rambunctious and naughty…and we like that."

They got plenty of screaming approval for their Portamento hit "Money" and their set closer "Let's Go Surfing" (featuring actual crowd surfing — how appropriate!); but perhaps the biggest positive reaction of the night came courtesy of the day's political events, with Pierce dedicated their song "If He Likes It Let Him Do It" to President Obama for his statements earlier in the day regarding gay marriage rights.

Between the nostalgic pop of Craft Spells, and the fast-paced head bobbing tunes of the Drums, last night's show made damn sure Seattle had plenty to dance about.