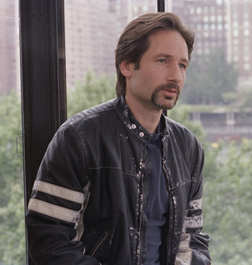 The one and only David Duchovny was in town recently, and our paths actually crossed. It all started on a Monday night in late March, at a SIFF-sponsored screening of Mr. Duchovny's feature-writing/directing debut, House of D (which opens 4/29 at the Metro). This veritable Duchovnyfest I found myself in would continue the next morning, when I was to meet the auteur in his hotel… to participate in a round-table interview.

I should say here that I was a huge X-Files fan back in the day. Yes, Mr. Duchovny (in the guise of brilliant, brooding, conspiracy-minded Fox Mulder) was my unwitting date on many an Arkansas Friday night. I watched religiously, through the move to Sunday nights in season 4, and up until the show jumped the proverbial shark with DD's departure as a series regular in 2000. I couldn't decide whether I was more angry with Fox (the network, not the Mulder), with series creator Chris Carter, or with that boring Doggett guy.

Oh, and remember that Bree Sharp single "David Duchovny, Why Won't You Love Me"? At the time I thought its lyrics had been extracted from my private dreams.

Please understand that I don't freak out easily, and I'm proud to say that I've held my own in the midst of some of the most notable notables of our time. But when I was faced with the opportunity for this in-the-same-airspace rendezvous… well, you can maybe imagine my fears of becoming a superfan starfucker from hell in the handsomely stoic face of a former idol.

Which brings us back, briefly, to that House of D screening. I'm sorry to report that the movie (about the adventures and discoveries of a 13-year-old Greenwich Village kid circa 1973 who grows up to be a goateed David Duchovny circa now) just isn't good. I can't in clear conscience recommend it to even the most helpless Fox Mulder devotee.

I'm even sorrier to report that the post-film Q&A with its creator that Monday night was heavy with… superfan starfuckers from hell. One man nearly hurt himself with a heaping dose of all-too-empty praise for the film, just for the opportunity to have DD look his way for a few fraudulent moments. A startlingly gushy woman near the front of the theater got her tired "What made you get into acting" question answered, then proceeded relentlessly to attempt additional queries, despite the moderator's repeated discouragement and growing impatience. And one younger-looking guy in my row simply would not take 'no' for an answer when he asked (and asked again, in a clumsily rephrased way) if David had any "idols" growing up. It was embarrassing.

In short, these people were good role models for what I should strive not to be the next day. I was newly determined to show Mulder (errr, Duchovny) that there was at least one sane person in this town. It was the Universe at work. And I'm glad I chose to listen.

Bright (but not necessarily early) the next morning, I arrived at the downtown hotel where the group interview took place. Among those joining me were two representatives of various UW media, someone from a radio station (I didn't catch which), and the usual local publicity reps.

And I nearly spat out my Vivace when I realized that one of the UW people was… the did-you-have-any-idols-growing-up guy from the night before!!

Undeterred, I looked over my notes one last time and waited patiently as the star was escorted into the small conference room and introduced to the first interviewer. That initial question was about, unsurprisingly, House of D, and being next in table-sequence I decided to devote my first query to that as well. (DD was in Seattle to promote his movie, after all.) So I turned to the best thing I could think of about the film: Erykah Badu's performance as Lady Bernadette, the wise and sassy mentor to the film's central character.

{Duchovny}
Oh yeah, what is that?

We're a local music and art and culture website…

Oh, Three Imaginary Boys — The Cure's debut album. The threeimaginarygirls site was all about the local music scene in the beginning, and was founded by three female people…

You talked a bit last night in the Q&A about Erykah Badu, who to me was just a revelation in her role. We'd seen her act before in The Cider House Rules, but that wasn't nearly as meaty a part for her. You told a funny story about the day she was in old-woman makeup [for her scenes set in the present day] and hearing a kid on the street say, "That looks like an old-ass Erykah Badu!"

She's really such an old soul anyway, so it seemed appropriate for her character's arc to be about wisdom carrying over into old age. You only had four days to work with her on House of D, and that seems to be very little time to sort of shove her into a character and work out everything she has to go through. What was that process like for you as a director?

Terrifying! Every time I started a major character in the film, I would freak out a bit because I thought, "Oh, well maybe this is the emotional heart of the movie." [In this case] I hadn't been able to rehearse, and I had this woman who is not used to acting. It's new to Erykah. The reason I cast her, though, is because I needed an actress who could inherently and innately be funny, in a way without pushing it….

The biggest challenge, now that you asked and I'm remembering, is that I had two people who never actually meet. [Lady's cell is in a high story of the House of Detention; she and central character Tommy communicate through a window Romeo-and-Juliet style.] They're never actually in the same physical space, but they have to have very intimate conversations. I kept wondering how I could shoot these scenes without it becoming a shouting match. With Erykah's performance I knew that once I got to cutting, closeup to closeup, it would feel like they were close.

I would agree that she's an old soul. I also loved that she had these green-yellow eyes. I'd imagined this woman in the darkness, with the silhouette of that big afro with the color of those eyes in the shadow. So she inspired me visually as well.

The conversation continued though topics ranging from the screenwriting process ("I like the idea of tiny occurrences having huge, reverberating consequences") to Robin Williams (he hams it shamelessly in the film as a mentally-challenged janitor) to the odd, Oedipal casting choice of Mrs. Duchovny (Téa Leoni) as the mother of the young central character (who David plays as an adult).

At one point, during a brief segue into his TV-directing experience, David even mentioned the X-Files episodes he'd helmed over the series' nine-season run ("By year six of the show, anybody could've sat in the director's chair and it could've almost made itself"). And by the time my second question came around, none of the other interviewers had taken the follow-up bait.

Now was my chance.

Since you men
tioned The X-Files earlier…

You can ask a question about it anyway. I didn't have to mention it!

Well I have a two-part question. We haven't heard much about that second X-Files feature film lately. I was wondering if you guys are still planning to get back together again…

…and part two is: do you think Fox Mulder would have any interesting theories about the big finger-in-the-chili story we've been hearing so much about?

Finger-in-the-chili? I don't know about this story. I haven't heard about it.

Well, a woman claimed she found a fingertip in her Wendy's chili, then went very public with the story. Call me paranoid, but it sounds like an X-File to me.

Well, I found a toenail in a calzone years ago. But there was no meat attached.

[laughs] Um, The X-Files movie. Supposedly we're all gonna get together and do it next January or February. There's nothing written down yet, I mean nobody's signed anything. Chris Carter is writing it and I think he's just waiting for whatever deal to happen with Fox to go ahead and do it. And then, you know, hopefully we'll shoot it in Vancouver again — your Canadian neighbor! — to get the mood we all like about it. As for the finger-in-the-chili, well I don't eat the fast food. Sounds like in that case it was a little too fast.

So yeah, early next year in Vancouver.

William B. Davis [who played the mysterious Cigarette-Smoking Man] never moved away, so I bet he's ready and willin'. He still attends performances at his acting school there.

Yeah, still doing that. He did before — that all actually pre-dated The X-Files. He should have, like, a big cigarette on the sign, shouldn't he?

I know, it could be very subtle and say "CSM" in big letters.

I don't think I'm being a braggart when I claim that this was the most lively bit of dialogue in the entire half-hour discussion. Because it was.

But it wasn't over yet. A few more questions remained, and in his responses Mr. Duchovny offered advice for aspiring up-and-comers ("If you have a great script, people will forgive deficiencies in the way [a film] looks"), spoke about the current filmmakers he idolizes (Coppola, Soderbergh, Woody Allen, Alejandro Amenábar), and plugged his upcoming acting projects (mainly Bart Freundlich's Trust the Man, due later this year).

By now our time together was coming to a close. David thanked everyone, shook hands goodbye, and walked toward to the exit… and then, without warning, the did-you-have-any-idols guy decided to come out of the closet. With a wary look, David graciously replied, "I remembered that was you when you asked your first question", and kept slyly inching away. A smile. "Yeah, I figured it out." And the door clicked shut behind him.