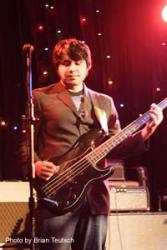 Magneto, with the Village Green

The Village Green is a band outta Portland who kindly made the I-5 hike northward to open a local showcase at the Crocodile {also featuring the Jeunes and Magneto}.

The first thing that struck us about the band was that bass player guy. He looks just like our friend Christian Quilici. When we told him he had a doppelganger in this town called Christian, he laughed and said, "But I'm Jewish!"

I liked the Village Green. To me, they're like Nirvana with harmonies, less equipment breakage, and a fourth person on keys.

Yeah, I can hear the Nirvana influences in parts — certainly in a few of their hooks, and frontman J. Nicholas Allard growls a bit raspy a la Kurt Cobain from time to time. And I wouldn't say he looks unlike him.

But I also hear a near-Brit-pop influence working here, as well as a grittier element at times. Other songs draw in a nearly 60s garage-pop flavor, especially with those "worthy-of-second-mention" gorgeous backing harmonies.

To distill it to a formula:

Hey, did you hear why hipsters aren't good at karate?

It's because they can't get past the white belt.

Bwah ha hah ha hah! Aww, sweet Jesus, that one gets me everytime. Anyhow, I just googled the Village Green {what, you didn't think I was writing this review at the Crocodile, did you?} and found on GarageLand.com that their influences are the Beatles, the Beach Boys, the Kinks, Blur, and Nirvana. So we've done a pretty good job nailing that one, donchathink?

I sure do. Next up, The Jeunes played a blistering set. But we have reached our imaginary moratorium of words of praise for a single band within a fiscal year for the Jeunes {and you don't even wanna know about those fines! We haven't been hit that hard since we discovered the Thermals back in 2003 and promptly reviewed them three (1, 2, 3) times within three months. Ouchie.}

Here, learn a little about the Jeunes…

Anyhoo, headlining the night was Magneto, a band we've been eagerly anticipating since we first played "ISA" on KEXP during our stint on Audioasis back in March.

Yes, ever since I first heard Magneto's debut CD Sounds Like Space, I've been really excited to see them live, as it's one of my favorite local records this year.

A little background: Magneto consists of Lian Light (vocals and guitars), Barrett Jones (drums, and he also produced the record), and Brian Vogan on bass. On Sounds Like Space they created a dreamy, layered sound that rocks while it enthralls.

The live experience was not quite what I expected. At tonight's show, the band played as a straight-forward three-piece rock outfit {though they have four band members credited on the album}. I have to admit, it felt a little lonely up on that stage.

Yeah, I agree with igChar (on this and all things, really). I'm a fan of Magneto's lush, swirly recordings, and live, the flavor was different. Their live show was more raw and edgy; it lacked the delicacy of their studio recordings. And I guess that's an okay place to go from recording to live performance. But I've grown so accustomed to/infatuated with their recorded sound, I had some trouble adjusting.

The roughhewn band onstage seemed very much another local Seattle band {which is a good thing, mind you}. Luckily, the pretty guitar-fingering was still there, and at times the overall fullness of sound. But for the most part, something I adore in the album was getting lost in live music translation. What I love about Sounds Like Space is the refined sound of sumptuous layered vocal and guitar tracks, the swirls and whirls and wah wah wahs. I missed the spacious quality of the recorded tracks.

Right. They needed a second guitarist. And a wah wah pedal.

And whatever igDana just said.