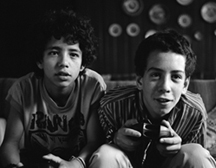 "You have to care about things to remember them."

Given only the premise of this fantastic little Mexican indie — two early-teen boys have a lazy Sunday, interrupted by a blunt neighbor girl and a pizza guy who just won't leave — one may be tempted to pass it by. But a deceptively simple plot barely scratches the surface of this understated coming-of-age gem, the best film I've seen so far in '06.

Duck Season's Mexico City protagonists Flama (Daniel Miranda) and Moko (Diego Cataño) have an empty apartment and a day to themselves, with glorious hours of nothing but Xbox and perfectly-poured Coca Cola ahead. Then Flama's slightly older neighbor Rita (fabulous Danny Perea) stops by, intent on using Flama's oven to bake a cake; completely absorbed by a riveting game of Halo, the boys wave her away and she goes about her task.

Meanwhile, a pizza delivery man named Ulysses (Enrique Arreola) winds his little motorcycle though the city's twisting streets, then rushes up eight flights of stairs, only to arrive at the apartment door eleven seconds late. The boys invoke Telepizza's on-time guarantee, which Ulysses refutes; all eventually agree to settle the matter with a winner-takes-all video soccer match. Then, the unthinkable: electricity goes out in the building, leaving the dispute unresolved and the characters to their own devices.

What follows is pure cinematic thrill, as the four souls fight off boredom with tentative banter that becomes surprisingly observant conversation and the wonderfully giddy abandon so often forgotten by us "adults".

First-time feature director Fernando Eimbcke captures it all beautifully, peppering the 90 short-n-sweet black-and-white minutes with gorgeous moments of poignancy and revelation. His final shot — an oft-discussed painting called "Temporada de Patos" (you guessed it: "duck season") — is a small triumph, sublime and haunting in the loveliest of ways.