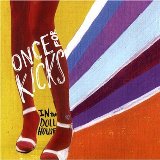 After many months in the studio, Northwest natives Once for Kicks released their 3rd full-length album, In the Dollhouse, this past November. The album is a slowly crafted, potent brew of crunchy rock guitars and pop energy with a light splash of Americana and offbeat arrangements. On occasion, Once for Kicks can overplay the multi-flavored music card: at times songs seem disjointed, with awkward transitions between avant garde instrumentation and grunge guitars. Yet the band can be forgiven for overstretching sonic boundaries because of the album’s smart, exuberant expression of normally maudlin themes.

Pelting drumbeats and bright, buoyant guitars energize "Bad Day," a determined ode to overcoming life’s upsetting curve balls. Bad day get out of my way … you’re not a tragedy, you’re just a bad day … I’ll break you down bad day. "Sunsphere" captures the mood of an emo arena rock ballad; it's impossible not to imagine a sea of heartbroken but hopeful teenagers singing at the top of their lungs this loves comes and it goes, making way for brighter days ahead before raising their lighters and swaying to the song’s soothing harmonies.

Yet Once for Kicks isn’t all optimistic smiles. In "Chemical Gem," rapid, warbled guitars create a dark, frenzied environment in which lead singer Bill Coury unleashes vocals so packed with distressed anger that he seems precariously balanced on the edge of a scream. Minor chords, Morrissey-influenced lyrics and broken vocals set the tone for "Flowers," an attempt to find closure (or vengeance?) and come to terms with a failed relationship. You let my flowers die. And now that we’re through, tell me that you lied.

Visqueen’s Rachel Flotard joins the band on "I Need a Script," a pop song that manages to maintain a punk edge, despite melodies and vocals that never leave the upper octaves. The beginning of "Cameraman" harkens back to the darkness of 70’s metal bands, but the potential quickly dissipates as the song launches into an elongated synthesizer sequence. Although this album may have some uncomfortable moments, its quirky exploration of a multilayered sound is generally a fun ride. Like all good Northwest libations, In the Dollhouse is a festive, refreshing indulgence that is well worth a taste test.