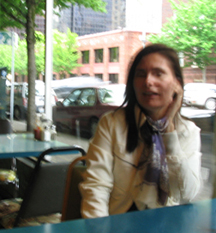 Lovely chanteuse Dominique Durand wants you to know that she is not Ivy, even though hers is the dreamy voice you may associate with the band's cosmo-cool sound.

Yes, this NYC-based indie-pop outfit actually consists of three very talented members, all of whom happen to be quite busy in their non-Ivy lives as well. Adam Schlesinger is in a little group you may've heard of called Fountains Of Wayne, and produces/writes for various other projects. Andy Chase released a solo album in 2003 under the moniker Brookville, regularly produces such bands as Tahiti 80 and Chocolat, and recently re-released Ivy's entire back catalogue on his new label Unfiltered Records. And Durand and Chase (who're wife and husband, by the way) regularly collaborate with producer Michael Hampton in the band Paco, which has released an EP and an LP to date.

I was thrilled at the opportunity to catch up with Dominique before a recent Ivy / Robbers On High Street / Astaire show at the Crocodile. She's a charming French import, and with her adorable Gallic-accented lilt (plus occasional Franglais sprinkled about for good measure) she spoke candidly on such topics as the band's new album In The Clear, an (imaginary?) appearance in a 1985 Agnès Varda film, and the challenges of raising two young children in a rockstar household.

I really hear elements of Ivy's progression on In The Clear. Which I am in love with, by the way.

It alternates between the jangly guitars and that "live" feel of your early work, the loungey sounds of the classic Apartment Life, and the more ethereal electronica of Long Distance. Style-wise it's very retrospective in nature — were you thinking about that as you made the record?

Yes, yes, we did. When the three of us got together and were ready to make the record, we just decided to try to basically capture the best moments that we liked in all of the [previous] records and try to do a melding of that. What we liked about the first record [1995's Realistic] was the guitars… with Apartment Life the energy was more visceral and had an innocence that we liked. On Long Distance, I personally really like the groove, and the grooviness. The challenge was just to put all that together to make In The Clear.

And it was a long process for you this time.

Well it was and it wasn't. It was a long process in a way that we made the record over the period of one year, but the actual time where we were working was not very long. It's just because the three of us were busy doing so many other things that we had to find time when the three of us were available at the same time! {laughs} But when you really calculate the time that we were together, it was pretty fast. Like maybe, I dunno, two months.

— and now you and Andy [Chase] are parents of two [Justine, 5, and Julien, 2]. You're halfway through your Spring tour, so what's that like being on the road?

Well, that's hard. A lot of people ask us what's changed when you have kids and you do music, and the only thing that really affects our career having children is the touring, sure! Because anything else… well the writing process is the same, being in the studio or whatever. But the touring is definitely different. I mean, I refuse to go on tour with them.

No! And right now my daughter is five and a half, so she is at that age when she really understands. She's very sad that we're not at home with her. It's just a hard thing to even think about. It makes me very sad!

Oh, well we can move on to something else!

{laughs} No, no, but what I'm saying is that now, where we are in our career and in our life — and Adam also has a child now [Katie, 2] — we can't just afford to go on tour for weeks like we used to. It's just not possible!

Well you mentioned your other projects earlier, and the Paco LP [which came out between the two most recent Ivy albums] totally helped tide me over between Ivy fixes.

{laughs} Well thank you so much.

Is there anything new coming up with that project?

With Paco, not for now, but Adam is gonna have a b-sides Fountains of Wayne album coming out, I think this month or next month, and Andy is working on his solo project called Brookville. He already had a record out, I don't know if you…

…aah, yes, and it's almost finished. His new record should come out in the fall or something like that.

As I was researching Ivy's film work online [they've collaborated with the Farrelly brothers quite a lot over the years, and actually composed the score to Shallow Hal], I noticed that your IMDB listing includes an acting role in the 1985 Agnès Varda film Sans Toit Ni Loi…

{genuinely surprised} I was? As an actress?! Really?! I don't think so. I love Agnès Varda. But, no.

The English title is Vagabond. Well, maybe there's another Dominique Durand and they mixed you up. This is the only acting role listed alongside composing credits for Shallow Hal and the Ivy song in Insomnia…

Me? As an actress? Show me. {looks at embracey's notes} Really it says that?

{laughs} I swear! In the role of "le premier motard" ["the first motorcyclist"]. I'll send you the link!

Was it in 1985? Because 20 years ago I was in a French movie. But that was not Agnès Varda. No, I'm sure. Well…? I don't think so. I'm sorry! {laughs} It's so hard to remember what happened twenty years ago.

One last question, and this is something that I've always wanted to ask you. Sometimes I'll mention Ivy to a friend or coworker — they'll walk by as I'm playing your CDs and they'll ask what I'm listening to, I'll say "The new Ivy", par exemple — and they'll be like, "Oh yeah, I love her!"

As if Ivy is one person and that person is you. Anyway, I always set people straight, but is this something you experience?
Not so much anymore. Once in a while. Usually it's when you go to a rehearsal studio and you're booked under "Ivy" and the people are like, "Oh, are you Ivy?" and I'm like, "Well yeah, I'm Ivy, but the band." Things like that. I mean, usually if they really know the band they know better.

That's good to know. Well, Dominique, thanks so much for the time! This has been a joy, but I don't want to keep you any longer because I know I'm cutting into your dinner break —

Yes, this was great!

{laughs} Good! So nice meeting you.