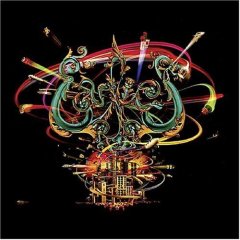 It is a fine, fine line, my friends, between psychedelic genius and, well, a boring ol' time. This can be especially dangerous when you love the Beatles with all of your heart to the point that you're less influenced by them and more of a cover band. Most songs by the Earlies hover hazardously close to this line and unfortunately, The Enemy Chorus tends to spend too much time across the boring, Beatles-wannabe line.

2005's These Were the Earlies was one of the most pleasant surprises of the year, especially with the magnificent prog-pop-rock gem "Morning Wonder." The Earlies appeared to position them as the heir apparent for the Beta Band or Of Montreal. This time the band seems to hit a bit of sophomore slump that is a little overindulgent and convoluted. This is not to say that The Enemy Chorus is unlistenable; instead, it's just an album that lacks focus.

Just from hearing "No Love in Your Heart," it seems like the band became too impressed with their thick vocal harmonies and interlaced instrumentals to remember to actually make the song interesting. Instead the song plods along and then it's over. The overt Beatles/Who worship is plain on "Burn the Liars" and "Foundation and Earth," as they both end up sounding like a poor attempt to mimic those bands.

The biggest problem with most songs on The Enemy Chorus is a lack of direction. The title track has all the elements that make the Earlies fascinating, but the song just seems to feel stitched together haphazardly without a cohesive melody until the second half of the song. An equally guilty trainwreck is "Bad is as Bad Does," the most Beta Band-like song on the album. It never feels like a song, rather it comes across as a series of cool ideas. The album's closing number, "Breaking Point," comes across as merely an excuse to make a lot of noise.

There are some moments that the band does fire on all cylinders, such as "The Ground We Walk On" and "Little Trooper." The tender ballads don't overindulge in the production and harmonies and share the same gentle 70's pop feel of Badly Drawn Boy's Hour of the Bewilderbeast. Possibly the most satisfying song is "Broken Chain," another slow song that is so ethereal bordering on Sigur Ros territory, but it clearly shows the strengths of the Earlies without overplaying them. Alternately, "When the Wind Blows" is the least psychedelic song on The Enemy Chorus and is also the most cohesive.

This comparison with the Beta Band is very telling. After the success, both commercially (at least in the UK) and critically, of The Three EPs, the Beta Band released Beta Band, which was a prime example of a band suddenly having more money and studio than they knew what to do with. It was rambling and self-indulgent and thusly, it wasn't received with nearly the same enthusiasm of The Three EPs. The Earlies seem to have fallen into the same trap, but hopefully they too can regain their focus as the Beta Band did on Hot Shots II. If you're a stickler to follow your band's full development, The Enemy Chorus might fill your discography, but overall, it's a record of those awkward teens for the Earlies.