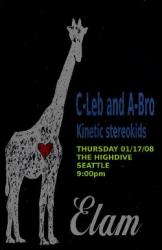 Last Thursday we went out to The High Dive in Fremont to see what turned out to be an unusual set for Elam. I'm used to seeing the songs performed as a solo venture, with Brian Yeager performing low-register vocals and moody guitar bits and usually only one backup person, either his female co-vocalist or his friend Matthew on turntables. This most recent show boasted a full backup band. Apparently Elam has changed the whole formula, as I was expecting to hear more layered versions of the music from the 2005 EP, Daybreak Sleeper. Instead, Elam has gone country, y'all. I was a little surprised, to say the least, but not disappointed. The whole concept is definitely more up-tempo than the original Elam stuff.

The first song was slow-paced with a plodding beat but a sweet and simple whistled refrain. I always love it when people whistle onstage. The set continued with an alt-country bent but still contained Brian's slightly melancholy vocal style, which at times reminds me of that dude from New Model Army.

Elam definitely got more comfortable later in the set and displayed the better part of their new catalogue. I heard some Elephant 6 leanings, a little Johnny Cash here and there, and then later some interesting experimental Beck-style blues elements. The fifth song started out with very high-action bass drumming, an electric infused backfill with psychedelic rips and an all-around frenzied feel that reminded me a lot of Spacemen 3, highly layered and texture-heavy. Elam ended the set with another sweet, lo-fi handclapper, which was cute.

We weren't planning on staying for the following two acts, but I'm glad we did. The second band, Kinetic Stereokids, flew to Seattle from Chicago just to play this show. We found out that the airline lost a bunch of their gear and they had to play on mostly borrowed equipment. The following day they were going to drive all the way to LA for their next gig. Wheels off, man…

They started out their set with a sample pickup placed directly on a guitar. The bass came in slow but got loud real fast, as the sample got progressively louder as well. The drums finally kicked in as the sample grew louder still. The lead guitarist then began bowing the frets of his electric with a drumstick, producing a weird effect, and also rocked the maracas a little bit. It was all very post-rock, reminding me a bit of Mogwai with all the pedaled effects and a bit of Tortoise, especially the fantastic drumming and basslines.

The first song segued easily into the second and was all over the place, quickly changing back and forth from a bass-infused, speedy drummed surf-punk style to a hypnotic, almost soothing Radiohead-inspired effect. There was also a definite jazz/funk influence to it all, which I originally attributed to the band's Chicago roots (but found out later they're originally mostly from Flint, Michigan). Later in the set they eased back into more of a mellow, therapeutic sound, which I think the heavily Belltown crowd needed, as most of the audience had retreated back into the bar. It was a shame because this band was awesome. They finished up with a variety of themes along the same lines — I'll just throw out some adjectives: cathartic, hyperbolic, kalaedoscopic, unpretentious…

I think the Kinetic Stereokids will go far, and it sounds like they're doing a lot of showcases and festivals on the east coast. The vocalist has some serious pipes, the drumming is amazing and the whole band is very together and talented, not to mention gracious: "It's super neat to be in Seattle!" All in all, I found the whole set to be dynamic and engaging, and I'll definitely catch them next time they play.

The final act of the night was also local: C-Leb and A-Bro. Evidently, C-leb is disappointed about the lack of good electronic acts coming out of Seattle and decided to start his own outfit, which is a respectable endeavor. Their setup was a drum machine, a sampler/synth, a single guitarist, and a featured dancer named Jerome, who was backlit behind a screen. Mostly the whole thing kind of reminded me of Fischerspooner, which is good enough although I don't know about listening to a whole lot of it at once.

They had a lot of highly stylized merchandise ("We've got t-shirts for those of you who can afford it"), and a small fanbase in the crowd were all wearing C-Leb shirts. It's true there aren't many electronic acts in Seattle but I feel like this would all go over better in a town like Miami or LA or wherever people do a lot of Ecstasy; it just seemed totally out of place here at the High Dive.

Later songs reminded me of early Depeche Mode with upbeat pop synths and super tommy drum machine bits, with some jungle thrown in for good measure. C-Leb is definitely into what he's doing, and punctuated his Pet Shop Boys-derived lyrics with matching hand motions and whatnot (some red pom-poms got brought out at one point). Technically, it's good electronica but not what I was expecting to hear so it was a little nerve-jangling.

Overall a very eclectic night at the High Dive and a great way to spend a rainy Thursday night!