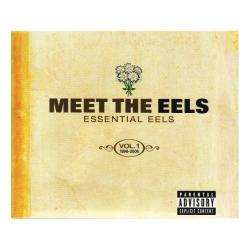 For most of us, we only think about the Eels when we come across a dusty old copy of Electro-shock Blues, or if “Novocaine for the Soul” happens to come on the jukebox at some depressing fraternity reunion. But they do have a fiercely loyal following, allowing them to put out live acoustic-and-strings albums (Live at Town Hall, from 2006) and not be a drag to their record company’s end-of-year books.

Well, it seems that their label, Geffen Records, finally saw the market expansion opportunity they had with the Eels, and hence this gargantuan retrospective. For the newcomer, the two-disc Meet The Eels: The Essential Eels, Vol. 1 serves as a healthy introduction to what they’ve been doing for the last ten years. For the long-time fan, Useless Trinkets: B-Sides, Soundtracks, Rarities and Unreleased, which, well, the title says it all.

I admit I was excited to dive into so much material by a band I’d always liked but never particularly listened to. “Novocaine for the Soul” can affect a Pavlovian reflex that jars me back to 1996, and I do really like “I like birds” — but I have to say that, on the whole, I’ve been listening for a few weeks now and there’s not a lot on either of these albums that convinces me to convert to the church of “Mr. E’s Beautiful Blues.”

The tracks from Eels With Strings: Live at Town Hall stand apart as particularly interesting: the version of “Mr. E’s Beautiful Blues” from Useless Trinkets is quite lovely, the string section really putting on a show and playing the track instrumentally (but perhaps that says something about the original version of the song). And I don’t where I was when The Essential Eels’ “I’m Going To Stop Pretending I Didn’t Break Your Heart” came out, but that’s as good a lover’s lament as I’ve ever heard.

It’s the kitschy, campy aspect of a lot of their music that finally makes this so hard to get into. I mean, on their biggest hits — "Novocaine for the Soul," "I like birds," "Mr. E's…" — their strengths lie in that funniness, that enjoyable suspension of seriousness that bands like They Might Be Giants rely on. The problem here is that the Eels seem to want to be taken seriously. A person simply can’t take this much comedy-as-art in one dose. It’s a one-or-two-songs-at-a-time sort of thing. Unless, of course, that’s your thing to begin with.

Like I said earlier, the Eels command the respect of many — I’d compare their relationship to fans with the sort of relationship Ryan Adams has. Musically, Adams and the Eels couldn’t be more different: but like Ryan Adams, who has a strong following that believes he can do no wrong, for the true Eels fans, Meet The Eels is an unnecessary collection of songs they already have and know and love. It’s Useless Trinkets that’s pure gold — finally, all these tracks (many of which they probably have already, in some form or another) together in one simple collection. But for the bulk of music buyers out there, Eels are a “love or don’t-give-a-shit” band. You’re either drinking the Kool Aid or stepping past the people who do, not really paying attention to the catchy anthems they're wistfully whistling to each other.