Today's pre-election news includes exciting endorsements, a bemusing lack of team spirit, a questionable (at best) attack, a fantasic song, and some very exciting pie charts. Let's begin, shall we?

Mr. Obama has met challenge after challenge, growing as a leader and putting real flesh on his early promises of hope and change. He has shown a cool head and sound judgment. We believe he has the will and the ability to forge the broad political consensus that is essential to finding solutions to this nation’s problems.

"From the very beginning I have said I am going to support the candidate that has the best chance for changing the way Washington works and getting things done and I will be voting for Barack Obama," McClellan said during the interview, which was taped for the Saturday broadcast of a new CNN show, "D.L. Hughley Breaks the News."

Well, now that's not very spirited. McCain is going to skip his own election night party? Is that like, a 12-day pre-mature concession speech I hear? (Slog)

Mugged for Obama? Unless she was mugged by a gentle dyslexic, @atodd is going to have a hard time convincing anyone she was defaced (literally) for Obama. (Wonkette).

"Misses Palin! i want to reer my little Head!" This video is goddamn hilarious and you should go watch it, right now. (TIG)

96.3 from 538!!! The intro to today's 538 tracking analysis made me giddy: "This is not the time when John McCain can afford a bad polling day. And yet he's had perhaps his worst one of the year." Just lookie at the pretty probability charts from everyone's favorite stats dude! (538) 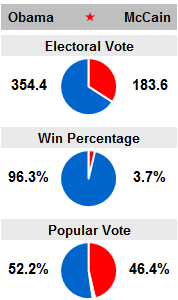 That's all for tonight, kiddos.

Except to say — keep on hoping, keep on telling everyone you know why it's so important to vote (and to vote for Obama), donate, and fer the love of all that is holy/holey/wholey, VOTE!!!