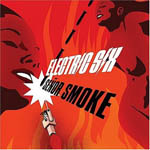 Ok, I'm a nerd. I said it. Let's put that all behind us. As a nerd, there are a few important rules that must be followed. When examining the nerd constitution (ratified by prominent nerds such as Al Gore, Bill James, and Mark Motherbaugh, among others), you stumble across this doozy in Section 10, paragraph 5: "You must enjoy novelty music."

With that simple statement, the careers of many artists have been bought (see one Mr. Yankovic). We nerds need to admit to songs such as "Magic Finger" by James Kolchalka Superstar, "Cadavers, Cadavers" by Brian Dewan and "Don't Look at Photographs" by Doktor Kosmos. I own albums by The Darkness, Tenacious D, and Andrew W.K. I still enjoy the aforementioned Mr. Yankovic (well, his classic songs such as "I Love Rocky Road" and "Yoda"). However, do I think these works are "good music"? Do I think they can be compared to, let's say, a Dylan protest song, an Aphex Twin electronic explosion, or a Bright Eyes ballad? Hardly. So, where does all this amusement music fit in? How can we justify the fact that in any given moment, I may much rather listen to Tom Jones' "Sex Bomb" than any Sufjan Stevens song? Well, I can't. Sorry, we're not getting let off that easily, my friends.

Why all this talk? Well, I've listened to Señor Smoke, the new album by the Electric Six and can't deny the fact that I enjoy it on some base level. Sure, it took me awhile to appreciate their hits "Danger, High Voltage!" and "Gay Bar" (and if you haven't seen the unofficial video, well, watch it now), but there is something to be said about having the ability to write ridiculously catchy — albeit throwaway — music. That's where the Electric Six stand: catchy, dumb, and a horrifically guilty pleasure. What else can you really say about an album that has as a power ballad that's chorus is, well, Backstreet's back, alright sung in all seriousness? Nothing, that's what you can say.

At least the Electric Six know that you can't bury the good songs deep into the album. They lead off with the Tenacious D/Spinal Tap-like song "Rock & Roll Evacuation," where singer Dick Valentine howls such great lines as, "Evil boys eating evil hamburgers/Evil boys eating evil fries" and "Mr. President I don't like you/You don't know how to rock." I've listened to this song more times than I'd like to admit. The aforementioned "Jimmy Carter" has an odd charm to it that's hard to define, likely powered by the straight-faced referencing to BSB. "Be My Dark Angel" sounds like a song that Rivers Cuomo might have written if he was hanging out with the Harvard D&D crowd. The cover of Queen's "Radio Ga Ga" seems very appropriate for the Electric Six, but it doesn't get going. The closing song, "The Future is in the Future" is a lost 1980's/"Yacht Rock" gem, especially with lyrics like, "If money talks/Then I'm a mime" and "I can't sit down/cuz I'm a dancer."

Unfortunately, the gems are few and far between on Señor Smoke. Most songs end up sounded kind of tired and uninspired in comparison. "Dance-A-Thon 2005" is a surprisingly bland song considering the title. "Bite Me" just sounds like a leftover from a Tenacious D session. Although it starts out promising, "Dance Epidemic" spends too much time in the uninteresting verses rather than concentrating on the darn catchy chorus. "Vibrator" is a song you know was done better in the 80's by the Revolting Cocks (Anybody else think that their cover of "Do You Think I'm Sexy?" is severely underrated?). The rest of the songs are more or less forgettable — and when you're living and dying by the novelty, that is a mortal flaw.

Many, many, many people will tell you they hate Señor Smoke, and, honestly, they're probably more right than wrong. Nevertheless, those people probably hate fun too. You know whom I'm talking about. Electric Six fill an important space in the great oeuvre of alternative music: the resident jester. Admit it, without your Electric Sixes, your Andrew W.K.'s, your Zambonis, how could you fully appreciate your Devendra Banharts, your Neutral Milk Hotels, and your Animal Collective? Get over it and, as that Six might say, "Macarena until the break of dawn."