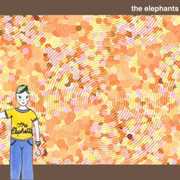 The Elephants band member Jason Freet mentions a (probably fictitious) expertise with ergot, a fungus that lives on rye and other grasses and can be lethal to humans. Ergot is responsible for the conspiracy theory behind the French Revolution: namely, that the Revolution came about because the working classes were feasting on the mold-infested bad grain ("ergot" is the organic base for LSD) outside Paris due to lack of food, thus inducing a one-inch-of-blood frenzy in the gutters of the city from a communal bad trip. (And who knows what Moses and his tribe were chewing on in the desert when he "saw the face of God"?)

In the same psychotropic way, The Elephants draw upon the psychedelic and apocalyptic notions inherent in early 80's rock, when the world seemed both day-glo shopping mall fucked up and near a nuclear mushroom cloud miasma at any Reagan-nappin' moment. "Part of you was see-through blue, part of me was sea foam-green, way too strange, out of range," they sing on the chiming, clomping track, "Invisible Blue." "That's when part of you was me, way too strange, out of range." Anyone for raiding the medicine cabinet?

"Most bands only have one singer/songwriter, so there are conflicting interests in who's actually writing the songs," Freet told hometown Tacoma Weekly earlier this year. But band members Freet, Cody Jones, and Trevor Dickson are all singer/songwriters. So why is their twelve song self-titled debut so amazingly cohesive?

Depends on what you mean by "cohesive." After all, their My Space page credits Dickson for "crayons and beer," Freet for "ergot and peanut butter," and Jones for "tzatziki and absinthe." The Elephants actually sounds as playfully random as those contributory descriptions imply — you can't tell where one musician begins and the other stops creating, but all of it is seamlessly weird and fun.

The Elephants is very diverse, fusing Talking Heads post-punk guitar with Echo & The Bunnymen psychedelic style vocals in some songs ("New Age Trees," "Golden Sun"), Split Enz robot-pop and Cowboys International downer techno-rock in others (the I'm-staying-on-repeat-mode-at-the-Estey-house-for-the-whole-drunken-afternoon "Oh, Tina" and "Human's Extinct"), and slicing up The Doors, Kraftwerk, and The Cure in ways both small and great.

But comparisons are ominous in how they trap a band. I have the feeling these sort of descriptions do no service to a record with plenty of original voice, and to a group mostly known for dizzyingly Dionysian live performances at the Crocodile Café, Chop Suey, the Comet, and hometown Tacoma's Hell's Kitchen — playing out with similarly genre-defying but oddly otherworldly-retro bands like Boat, Youth Group, and The Baskervilles.

But as most critics and fans will tell you, band devotions start with one or two great songs, and on The Elephants, the caricature of "Oh, Tina" couldn't be more compelling, another sad song about a girl in the vein of Siouxsie's "Christine." Meanwhile, "Human's Extinct" is the best end-of-the-world song since The Cure's "Grinding Halt" on that band's first album, back when not-yet-Fat Bob was proudly power pop. ("No more construction, mindless consumption, garbage dumping, oh-oh-oh-oh, oh dear God, they humans killed themselves and now they're gone.") And then there's the barefoot-and-hallucinogenically hungover "Don't Sleep In The Leaves," advice I certainly could have used before my weekly three hits of purple barrel acid through the summer of 1985. Far fucking out, man!