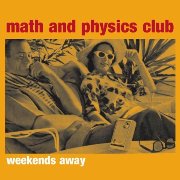 Math and Physics Club started as a basement duo of longtime friends vocalist/guitarist Charles Bert and guitarist James Werle when they went away to college in Bellingham. It wasn't until a couple years after graduation, in the summer of 2004, when James (freshly back from the Peace Corps) and Charles started the project back up again. They soon met drummer Kevin Emerson, who had moved out from Boston looking for a band. Bass player Ethan Jones saw the band play at an EMP open mic, and secret weapon violinist Saundrah Humphrey joined up shortly thereafter.

With a solid group intact, it wasn't long before songs were perfected and ready for release. With the interest of several labels piqued, the band jumped at the chance to release their first two elegant and enjoyable extended play discs on the same label as their heroes, The Lucksmiths. Matinée Recordings, based in Santa Barbara, were just as excited as James and Charles to have signed the five-piece. The band is the first American band in the last five years signed to the international-underground pop label (and remain the only active one — all the other US-based bands with releases on Matinée have broken up). It makes a weird kind of sense. Listening to them brings me back to the freshly squeezed pop-pulp days of Orange Juice and and other Scottish bands like Josef K in the early 80's.

The eight songs spread over these two EPs show the developed work of an assured, mature melancholy pop band. It wasn't long before their songs received airplay on KEXP (thanks to John Richards), and they had a strong following by the end of 2004. Over the course of 2005, they've grown from only about six songs to play live, to playing for raving crowds at both Bumbershoot and the Sasquatch Music Festival. In addition, they've played up and down the West Coast opening for The Lucksmiths (a dream realized). Add in dates around their homebase of Seattle and Olympia opening for John Vanderslice and Calvin Johnson and you've got yourself one happy Math and Physics Club.

Weekends Away was released in early 2005 and features the gloriously adolescent "Sixteen And Pretty" ("The smell of grass and cigarettes — pirouettes around the lawn — I was just like any other boy"). Bert's voice obviously draws much of its influence from Morrissey, but never gets despairing or seeps in self-parody. He merely uses the style to ruminate about "Love, Again" and gloating humorously about "When We get Famous."

The high points on the recent follow up EP, Movie Ending Romance, are Humphrey's increased use as a player, making the sorrowful "Graduation Day" ("I should have learned to stay away") so compelling, and her riffing on the great cover of the Beach Boys' "You're So Good To Me" ends the set superbly.

These eight songs may get occasionally unhappy, but they never get unhealthy. The humble but quietly striking playing of the band makes Bert's little stories enjoyable on multiple plays. The delightful packaging style is a treat, too.