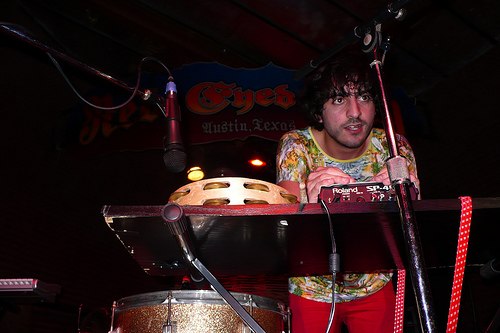 I've been praising the inspired calypso-trance work of El Guincho for months now. The transcendent, global feel of his album Alegranza! outshines any other album that I've gotten my grubby lil fingers on this year. Exotic tropicalia mashed together with rotating sample loops and pulsating body rockin' rhythms made for a refreshing live experience at the Nectar last night. Portland keytar artist Copy and the ever-fetching DJ Kid Hops opened the show.

Seeing El Guincho play was a bit different than I expected. The people that came to see him came to dance. There weren't many stiff-bodied hipsters, but instead I saw several over-60s shakin' it hard (or as hard as they could). El Guincho and another instrumentalist started straightaway with several new songs. It took a few to get the crowd loose, but by the time they played "Palmitos Park" and "Kalise" it was a sweaty dancy mess inside Nectar, with only a few people retreating outside to the cool air. Halfway through their set, El Guincho stopped the music to complain about the way the monitors sounded and after a short intermission they were underway again.

Their performance was steeped more in the world music end of their musical balancing act. There was nothing shiny about El Guincho, nothing slick or urban European. He was making music from his home (Canary Islands) and blending it with all the music that has influenced him during his travels and from his current home (Barcelona). There was an infectious, almost rabid, feeling in the air that pulled me into dancing. I was pleasantly accosted by a female neighbor to my right, encouraging me to dance, exclaiming she had only heard El Guincho today and was very much enjoying the show.

I guess what set this show apart for me was the dancing camaraderie and the authenticity of the music. Deeply layered in percussion and repetitious rhythms, just hearing and feeling what they were playing took you to another place entirely. I see lots of grimy indie bands and polished glitch artists, but there is something so much more primal and natural about seeing artists perform music that began before you were born and will continue long after you're dead. As good (not great) as the show was, listening to Alegranza! on headphones takes the cake. That's where the dance party in my underwear happens… alone in the house, and alone with the world and it's amazing cacophony of sound.