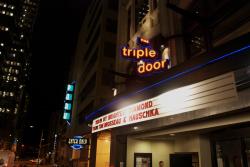 The Triple Door is one of the best venues I've been to since arriving in our fair city of Seattle. It's dark, hushed, comfortable, and the sound is spectacular. It's not to say that the grittiness of the Ballard bars or the expanse of the Showbox don't have their appeals – trust me, they do – but the Triple Door is womb-like, and glittery, and lush. It was the absolute perfect venue to see a series of solo performers at this past Thursday, headlined most notably by my good friend, Tom Brosseau.

The set of musicianship was perfectly matched up, from start to finish. Opener Rafael Anton Irisarri crafted a complex series of electronic infusions and lullaby strains through a variety of means, mostly directed through a laptop, in an icy blue light. Hauschka threw beaded necklaces and wind-up ducks in and out of a baby grand piano with abandon, pulling us into a trance with his haphazard, beautiful mess of an orchestration. But when Tom Brosseau took the stage… *sigh*. It all shifted. You see, Tom really pulls on my heartstrings. I have a hard time explaining his particular style to people with proper weight, because he's such a strange kind of wonderful. A reformed farmboy with punk rock records in his suitcase. A young man from the California coast, singing out in the Dakotas next to a set of railroad tracks. City and grit, but with clean sheets and comforting hands. I want so badly to do him justice, but many a night my words and camera both will fall just short of what really happened for those few hours we were lucky enough to spend together.

I suppose I'll give it a try.

At first, to all outward appearances, Tom gets on stage and takes on a familiar role. Singer songwriter, usually without a seat, smiling in the spotlight. From first listen, you love it: his voice rings out like clear, pure bells on the imaginary breeze in the dark, intimate venue. He's handsome as well, with a chiseled jawline and a long, lanky stature.

But it's apparent, just about immediately, that he's not just another guy with a guitar. For the whole duration of the set, we're woven into his world, mesmerized – somewhere between the buskers and the sidewalks, and grass blowing in the breeze with a sunflare in the lens. He's tremendous, and lovely, and razor-edged all at once.

I'm not sure about the rest of the patrons at Tom's shows, but my friends and I are always left wanting more: the night invariably ends too quickly, and we're left back at our city apartments with Tom's albums, and those slices of front porches, and dirty white t-shirts, and the insides of hot cars on the highway. It's all folded up in the corners of our minds, as we sit there looking at each other, awed – wondering what just happened to us, and if anyone is capable of speaking accurately about it.

In short, before I lose you completely in my sea of endless analogies: Tom Brosseau is fucking brilliant. I could go on about him forever. If you missed this show – well, you're forgiven, because there were about eight other mindblowing bands playing in Seattle last Thursday. But do yourself a favor and pick up some of his albums, bookmark his websites, sign up for the mailing list, and keep an eye out for the next time he's passing through town. No matter which end of Seattle he comes to, and whatever you have to give up to go, you won't regret handing your night (and your heartstrings) over to him next time he's here. Promise.