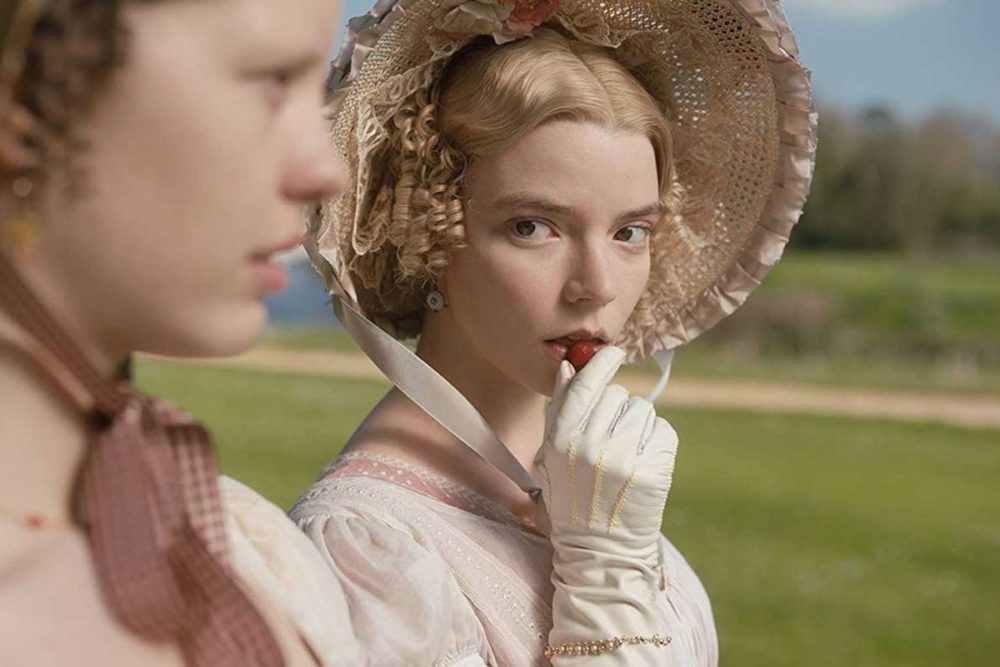 “I always deserve the best treatment, because I never put up with any other.”
– Emma Woodhouse

While Clueless remains, in my eyes, the very best adaptation of Jane Austen’s “Emma,” I will say that this frothy new version is pretty goddamn delightful as well. Autumn de Wilde’s Emma. explodes with the splendor of its lush, gigantic estates, near-perfect casting (look, any time you cast Bill Nighy; he’s gonna be BILL! NIGHY! and he will most def. BILL! NIGHY! all over the place), and an almost cartoonish way of delivering the story’s most comedic elements.

For those who are not devoted Austenites, the story goes like this: Pretty, popular, and very, very, very, very, very rich Emma Woodhouse (Anya Taylor-Joy) is the envy of all of Highbury. She generously takes on a friendship with Harriet Smith (Mia Goth, who is literally perfect in every single movie she is ever in) – an orphan who is of course in need of some “improvements” to make her more desirable to society.

Miss Smith is in love with Mr. Martin (Connor Swindells), a man deemed unacceptable in Emma’s eyes. Instead, she presses Harriet to turn down Martin’s proposal and match instead with Mr. Elton (Josh O’Connor). Unfortunately, Mr. Elton is taken with Emma herself — who is currently occupied with obsessing over the absent and ridiculously wealthy Mr. Churchill (Callum Turner). And then of course there’s Mr. Knightly (Johnny Flynn): a longtime family friend of the Woodhouse’s who affectionately reprimands Emma on her misguided matchmaking activities.

Like all of Austen’s tales, this one winds round and round in a circle of misunderstood intentions, petty jealousies, declarations of wealth and station, and the stubborn pride of its main subjects that ends in a breakdown of smoldering emotions.

This adaptation also adds another layer of extreme opulence. I don’t remember any other version panning so lovingly over each and every item in the haberdashery, lingering over each piece in an art collection, or showing the lengths to which a household’s servants in that era would go for their masters.

Taylor-Joy is absolute perfection as Emma; batting her lovely doll eyes at the screen and haughtily pressing on in the service of her “amusements.” I’m not sure I’ve ever seen her portrayed on screen more succinctly — in period dress, I mean. (AS IF!) And Goth is her perfect opposite as Harriet, exuding an awkward childlike innocence and total trust in Emma to guide her towards popularity.

Let’s talk about Knightly for a second; while I think Callum Turner as Churchill out-smolders him in a number of ways, Johnny Flynn exudes charm and earnestness as George Knightly — and de Wilde gives us a FULL VIEW of his backside in the opening sequence of film, which I am absolutely not complaining about. Female gaze forever and ever, please!

The only possibly failing of Emma. is its, as mentioned above, almost cartoonish comedy. While much of the character’s reactions seemed over-the-top, I didn’t really notice how crazily blown up it was until Mrs. Elton showed up legit looking like the Disney version of Cinderella’s evil step sister Drizella. Despite the fact that it bugs a little, ultimately that crazed comedy is part of what makes this adaptation so endearing.

My Austen-loving heart remains entranced with one Miss Emma Woodhouse and the characters that inhabit her world. Go see this one! It’s totally worth it.