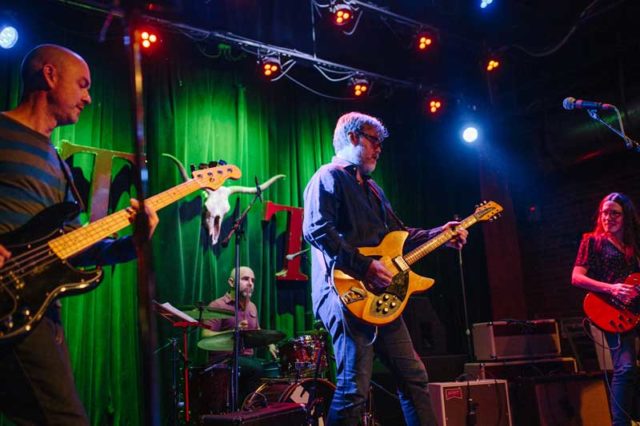 Western State Hurricanes Reunited! Here’s our scrapbook of the night of fun and friends and some of our favorite songs!!!

I have a long history with The Western State Hurricanes. Even though the Seattle band’s heyday (circa 1998) was just a wee bit before I moved here, the cloud of Western State Hurricanes mystique was woven into my courtship with Seattle. During my own heyday of nights out and making best friends with folks who really “got” me (the 2000s), I listened breathlessly to legends of the band’s feats and escapades.

The Western State Hurricanes were the precursor to one of the bands who had a strong hand in defining my 2001-present: The Long Winters (as evidenced by the hundreds of articles on this site mentioning them).

The Long Winters imported most of the WSH songs into their sets and albums – which only grew the WSH legend. Whenever an original WSH song was played at a Long Winters show, a friend who knew better would remark how different it was from the original. For years I ached with the question, “WHAT DOES THE ORIGINAL VERSION SOUND LIKE?!?!?”

A huge round of applause for Latent Print Records and John Roderick (of the WSH, Long Winters, and many favorite podcasts) for revisiting and mastering those covert unfinished recordings and pressing them on limited edition pretty, pretty yellow vinyl (which you can see and buy along with a host of other neat WSH merch in the Latent Print Records store – support your local record labels!!!).

Adding to the pile of WSH radness, the band and label celebrated the vinyl release of this piece of Seattle music lore with a pair of shows, reuniting the Western State Hurricanes in all their glory at the Tractor on February 7 & 8, 2020.

There was an indie-gogo to get the vinyl project going (huge thanks to everyone who pledged!!!) – and from that I scored my ticket to the second show + that pretty, pretty yellow vinyl.

The Saturday, February 8, 2020 show was incredible. The opening band, The Nevada Bachelors (who morphed into The Dear John Letters, etc.), were in top form (watch this!). I forgot how much I missed those songs.

The Western State Hurricanes set was just as phenomenal as I’d long-hoped it would be. I sang along with just every song in the set – thanks to muscle memory from many a Long Winters show. “Unsalted Butter” and “Cinnamon” were exquisite in their original form. The alt-original version of “Carparts” knocked my socks off (thanks to imaginary Dana for capturing this video of it). Love and joy were in the air – and the songs floated and filled the room with a brazen glee.

As far as I know, the WSH catalog is a full 10 songs. To fill out the set, the band performed covers of some of my favorite Pacific Northwest songs. They played a BEAUTIFUL version of Death Cab For Cutie’s “Pictures in an Exhibition” from their 1997 release You Can Play These Songs with Chords – made slightly surreal because Ben Gibbard was enjoying the show from the back of the venue.

And here’s a longer version of the Western State Hurricane’s covering Death Cab For Cutie’s “Pictures in an Exhibition” – THANK YOU CHRIS ELKO for this and all the other videos!!!!

A few songs later Mr. Gibbard surprised us as he joined the WSH on stage to help them with a couple of songs, including “Big Dipper” by Built to Spill (from their 1994 release There’s Nothing Wrong with Love) and that “Teen Spirit” song by Nirvana which triumphantly rounded out the set.

A major highlight of the monumental night was that it brought just about all my favorite people from said heyday out to the Tractor. It was the best class reunion we could have hoped for.

Massive thanks to our talented friends Laura Duffy and David Lee for sharing their photos from this night of BIG FUN and making our virtual scrapbook come to life!

Thanks to everyone for the amazing time and all the perfect hugs. Let’s do that again, a lot.

Want some more? Here is a playlist of videos Chris Elko shared of the February 7, 2020 show (the first night).