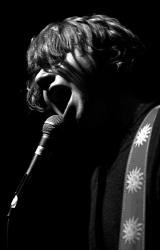 Hosted by 107.7’s DJ Harms, EMP’s annual SoundOff kicked things into high gear. Straws were drawn, play order was determined, and all four bands put on shows that truly embodied the spirit of the all ages crowd…energetic, spunky, and ridiculously talented.

The New Faces are more than likely new sounds for your old ears. For all you first timers, think Paul Banks vocals meet Arctic Monkeys hooks with old Brit Punk sensibilities. This Port Townsend three-piece's cohesiveness far surpasses their suggested ages of 16 and 17.

With music catchy as the pox and a brilliant live show to tout, I can’t imagine this group won’t go far. With wisdom far surpassing their years, I quote a recent interview with New faces did with What’s Up Magazine:

“If the music is good, that’s all that matters. It doesn't matter if a band sounds a bit like someone else. In fact, it’s pretty unavoidable not to sound like somebody else.”

An art form…or any substance for that matter, can be reduced only so far. Music is atoms and atoms are electrons, protons and neutrons that become quarks…but then what?

Bottom line: these guys, despite their age, seem to have a firm grasp on what is right in their world. Reading this stance on all their preemptive comparisons made me love them 40x more than I already did.Sounding years older than his age might suggest (aurally and lyrically), lead singer, Nico Jahnsenn, along with bassist Kyle Hove, and drummer Conor Sisk carried their audience through an impressively mature and refined set. With airplay from our buddies over at KEXP already under their belts, I really do think this band has potential of local domination, if not world domination in the future.

The Dead Are Judged

“Uhh… these look really gloomy, you guys…” I mumbled when I shot the Dead are Judged for the first time earlier last month. “Good!” they responded, triumphantly. This Duvall five-piece definitely turned the volume up. Vocalist Alex Pasibe, with the passion only a teenager in a metal band can harness, worked the stage, pacing back and forth, spitting out lyrics like a champ.

The skillful double pedal drumming and progressive guitar tapping were of an uncharacteristic caliber for guys so young. Definitely a crowd pleaser.

Hailing from Pendleton, Oregon; the group’s “no nonsense” attitude was something I could sense from the first time I met them. Founded by brothers Shane and Jess Cooley, the visceral musicianship fueled by throaty growls and synchronized head banging surely hit every metal lover in the room hard in the heart.

Emotive lead singer Chris Kittridge screamed with the conviction of a wounded forest animal. “Brutality is a beautiful thing,” cites the band’s MySpace page. Indeed, it is.

“Sci-Fi Horror” was the first description I was offered in preparation of meeting this eccentrically dressed Duvall five piece. I found the group to be as enchanting as the luminescent eyeballs on the short pile television sets the band had placed on the Level Three stage last weekend.

This quirky and tremendously fun five-piece left not a frazzled hair in the room. Lead singer Kyle McCarthy had a way with the audience. His incredible confidence and showmanship propagated the band rapidly through their allotted slot. He charmed the hell out of the venue and left the stage’s floor devoid of any untread ground. I thoroughly enjoyed their 30 minute set, as did the raucous audience.

Empowered and inspired by the end of the night, I left the EMP looking forward to a long night with my weapon of choice: dusty reissue strat. I’m sure I wasn’t the only one that night. With weeks two, three, and four in the works, time will only tell which of the competitors will win the coveted Bumbershoot stage late next summer, and invaluable studio time with seasoned record execs.