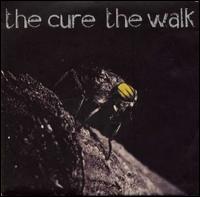 Maybe Robert Smith was a little sore that his band's 1991 appearance on MTV's Unplugged never got the chance to be released on album. Maybe, by 2001, he figured he'd take matters into his own hands, and took the band into the studio to lay down a bonus disc full of alternate acoustic versions of the tunes collected for that year's Greatest Hits.

"The Walk" is one of those. The original version's a tarantula-pop/dance masterpiece full of gossamer layers of guitars, hooting keyboards and all the charms The Cure can muster when its stuck midway between its goth and pop extremes. Acoustically, it's a sliver of its former self, with xylophones standing in for keyboards, and the loss of psychedelic effects pedals remind us how much importance Smith's use of the studio has to transform his writing from mere songs to dark-rock masterpieces.

Or maybe, Smith just tossed together that bonus disc of acoustic versions to bait longtime fans into picking up yet another compilation. It worked, at least on this Cure completist. And, in retrospect, I kind of feel like a bit of a sucker for falling for such an obvious ploy. It's still not as bad as the time that, after seeing it sit in the record store for more than a year, I was tempted to spend $35 on an import copy of Three Imaginary Boys … about three weeks before its American re-release was announced. But I'll save that sad story for another day.