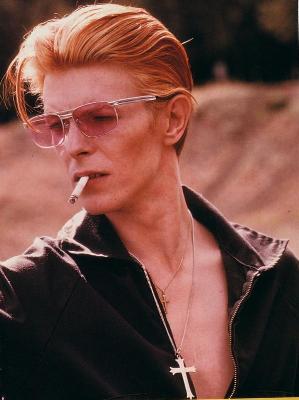 Alas, none are named Ziggy, nor does they come from Mars, but a hairy, rare, yellow spider has been named after the Thin White Duke, according to the English newspaper Telegraph UK. Heteropoda davidbowie is a fearsome looking specimen to be sure, and really, the only things the two have in common is that they are long-legged and blonde. I wonder how long it took for German scientist Peter Jager to find them- five years? Did he find the Queen Bitch? Does it love jean genie snacks? Does it behave like other spiders or is it a rebel? There is so much to learn about our new friends (and so many terrible puns to make, apparently)!

Heteropoda davidbowie is extraordinarily rare, found only in Rameshwaram (near Sri Lanka). Approximately only 500 exist and their habitat is of course in danger. They face a similar plight to the tortoises of Costa Rica with the destruction of their habitat due to the tourist industry. As an arachnophobe, if I found one in my hotel room, I can’t say I wouldn’t immediately smack it to death with the first hard thing I could find. As someone who cares about animals, I feel for the wee, terrifying lil guys. Jager stated he began naming spiders after celebrities to garner support and attention to their plight. I think it might be working.

I wonder…are they afraid of Americans? (I’m sorry, I can’t stop!)

As a favor to my fellow arachnophobes, I have included a picture of the spider’s namesake instead of one of the specimens. You can look the ugly brutes up yourself.

{Photo credit: David Bowie’s MySpace page. The spider does not yet have one, but he is newly discovered. Give him time.}