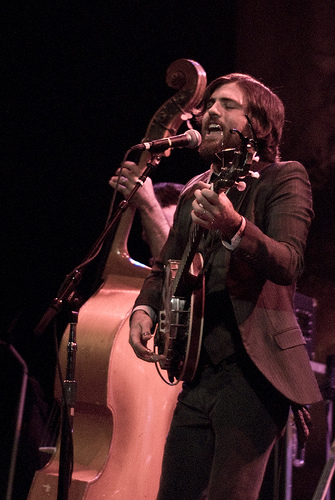 Photoessay: So happy to be sad with the Avett Brothers & Heartless Bastards

Ever since I caught wind of “Tear Down the House” off of 2008’s The Second Gleam, I’ve had a thing for the Avett Brothers. They’re alt.americana without too much hippie folk, a deconstructed version of a front porch jugband full of new-old soul singers, a sort of modernized country-toned heartbreak festival without a single strum of twang. Epic, pen-to-paper lyrics fall in waves like clean white sheets, settling down on top of skilled fingerpicking and down-home harmonies. In short: these guys are gorgeous. The Avett Brothers are simple enough on some base levels to appeal to the casual listener, warm enough for the dreadlocked touring free-love set, and layered enough with lyrics to stop even the most jaded music critics right in their tracks.

Touring with the release of I and You and Love, this quartet took the crowd at the Paramount through a beautiful set last Friday. The songs they chose never got too-foot stompy, and at the same time never strayed too far from the rootsy base of their catalog. Just as staggeringly lovely was the set put on prior to theirs by Heartless Bastards, who wound up being the Avett’s perfectly paired up companions to warm up and wow the diverse crowd. The lead female vocalist was strong and ballsy with her tone, one part Neko Case to four parts grit, with a foundation of grunge-girl inflection that juxtaposed with some Patsy Cline records and old-timey radio shows. The other three-fourths of the band took on an equally powerful stage presence, even without any additional backing vocals. Together, Heartless Bastards translated extremely well — it was clear that all four of them belived in every note they played, and it was a pleasure to watch both bands get behind their respective performances with earnestness and confidence.