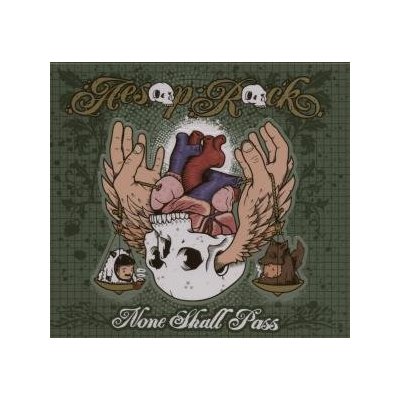 It's nice to start a new year with a blank state. Well, maybe at least a less covered slate. Or maybe a slate that you can maybe discern is buried under the pile of records that have been haunting your every waking moment for the last six months. So, without further ado, here are some mini-reviews of records that probably deserve better (or worse – much worse – in one case) but this is what they get. Enjoy!

I know I should like Aesop Rock’s newest album, None Shall Pass more than I do, but nothing on it really grabs me after the killer title track. Sure, the album is intelligent and quirky, but just the fact that I’ve been trying to write a full review of this disc for months now and I can never come up with the words because, well, none pop up, that just speaks volumes for the album itself. Don’t get me wrong, Aesop Rock still creates some great underground hip-hop, but None Shall Pass just feels a little less inspired than Bazooka Tooth and lacks the hooks of album like Busdriver’s Roadkill Overcoat. Rating: 7.1/11

Much like Aesop Rock, I really thought, logically speaking, I should have liked the Shout Out Louds’ Our Ill Wills much more than I ended up. I mean, if a song from the album happens to randomly come across my iPod, I am not upset, but I have never found myself seeking the music out – which, in itself, should be the ultimate test of music. The Shout Out Louds were hyped like all heck and yes, they are promising, but they come across as more of a watered down version of the Arcade Fire with a healthy dose of early Cure. Heck, the opening track “Tonight I Have to Leave” more or less rips off the melody of “Inbetween Days” note-for-note and it doesn’t help that lead singer Adam Olenius’ voice sounds like a kiddie version of Robert Smith. On other tracks, the band seems to channel Pulp (“Suit Yourself”) or the Sundays (“Parents’ Livingroom”) amongst other Brit-rock luminaries. There is nothing particularly wrong with Our Ill Wills, but then again, there isn’t anything particular right about it. However, if fluffy pop-rock is on your menu, the Shout Out Louds are the way to go without filling you up. Rating 6.5/11

The Castanets
In the Vines
Asthmatic Kitty Records
{link to purchase}

If it is already a dark & stormy night for you, then the Castanets’ In The Vines might not be the best album to play. Or, maybe, it is the perfect album for the setting. The Castanets are cut from the same cloth as Palace, with a heavy dose of post-folk rock that is ethereal and haunting, but unlike Palace, the Castanets doesn’t seem to be adverse to using a little technology to craft their sounds. Songs like “The Early Game” are very straightforward, filled with slide guitars and echoing vocals that evoke a time gone by that can only be revisited in dreams. The Castanets aren’t afraid to mix it up, though, such as “Strong Animal” that mixes in synthesizers and tribal drumming creating more of a Calexico sound. The highlight of the album is “Three Months Paid,” a sort of Radiohead-meets-country song, if you can imagine such a thing. In the Vines is one of those lost gems of 2007. Rating: 8.1/11

Amongst the bands that have burbled up through the cracks in the DFA collective, Black Dice might be the most innovative and, conversely, the least accessible to the average listener. Much like Aphex Twin, Black Dice really hold no pretense about recording “songs” as much as sound collages and their latest album, Load Blown is no exception. The album opens with “Kokomo,” a song the might be the antithesis of the Beach Boys song of the same name. “Roll Up” is the closest thing to a song that could be called “radio-friendly,” with distorted thumb piano(?) over a mangled beat, while “Gore” is downright sinister – a rolling number with a lurid sequencer running the show. “Toka Toka” is probably the most entertaining – it bring to mind Kraftwerk after too much caffeine and sugar. I’ll be the first to admit, Black Dice are not for everyone. Heck, they’re probably not for 99.5% of the population, however, if sonic adventures are your ilk, than Load Blown is definitely a treat. Rating: 7.4/11

Maybe you woke up this morning and thought, “where have all the psychedelic bands gone?” OK, well, beyond that being down odd, it is an easy question to answer: nowhere, they’re still in San Francisco. The Wooden Shjips, weird spelling and all, are waving the psychedelic flag high and proud (alright, maybe the pun was intended). You can expect extended jams, odd instrumentation and really weird stuff on their self-titled EP. “We Ask You to Ride” is right out of the Doors playbook with its thick organ and overly distant vocals, it’s like My Morning Jacket on steroids. “Losin’ Time” is, in its roots, a garage rock anthem, but somewhere the Wooden Shjips left the energy behind, creating something that sounds like an Invisible Eyes 45 rpm played at 33 rpm. “Shine Like Suns” is an unmitigated trip into a hot desert without water (and likely a great deal of peyote). The Wooden Shjips might be a little too relaxed for my likes, but if you really feel the need of ‘60s-influenced jams, head their way. Rating: 6.1/11

Talk about a band that took a sharp nosedive, career-wise. VHS or Beta’s first album, Le Funk was interesting enough, while their second disc, Night on Fire at least produced a killer opening song. Their newest album, Bring on the Comets? My sentiments exactly if it will put this ba
nd out of its misery. This is a piece of plastic filled wall-to-wall with tired and mediocre dance rock that sounds like the lost D-sides of a Rapture album. “Love in My Pocket” resonates the blandPaw ness of the album, while “Take It or Leave It” is faux-Duran Duran without the hooks … and that might be considered the high point. The title track is startling ‘80s arena rock as if VHS or Beta discovered an unknown love for Toto. All in all, Bring on the Comets is a train wreck, stripping anything interesting from the band – that is, if they had anything interesting left – and leaving us with yet another Bravery/Radio 4 clone. Rating: 3.5/11