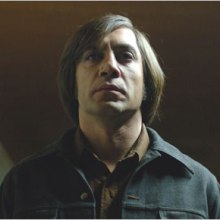 There were about 1000 films given proper theatrical releases in 2007 — and this total doesn’t take into consideration increasingly popular methods of alternate distribution, or homegrown DIY works showcased in booming alt-cinemas across the land, or the countless films featured at major (and minor) festivals around the world that never got picked up by a distributor.

The ten films that made my yearly best-of list, plus the 76 honorable mentions that follow below, represent about a third of what I saw last year. So I still missed most of what was out there.

Given the sheer volume of films, and the amount of quality work on display last year, whittling down my favorites to a list of only ten was the most difficult it’s been since I started writing for TIG in 2002. The masterful No Country for Old Men is undoubtedly the best I saw in ’07, but (skipping a “razor-thin margin” pun) Sweeney Todd is a very close number two. It kills me not to be able to rank the wondrous Emma’s Bliss, my favorite film of SIFF 2007. Same for the superbly written, sharply feminist boy-movie-for-girls Juno, Julien Schnabel’s astounding Jean-Dominique Bauby biopic The Diving Bell and the Butterfly, Ang Lee’s nasty sexpionage drama Lust, Caution… oh, I could go on.

1. No Country for Old Men
The Coen brothers’ best cinema outing since Fargo combines the dark humor (and, on occasion, the small-town-police-force wackiness) of that film with the fierce viciousness of earlier works Blood Simple and Miller’s Crossing. The result is a masterpiece. Tommy Lee Jones is even more marvelous than usual as a soon-to-retire Texas sheriff chasing a psycho serial killer (terrifying Javier Bardem) who in turn is chasing a Macguffin possessed by (also great) Josh Brolin. The men’s stories play out perfectly: the gorgeous construction of every scene makes it beautiful and awe-inspiring, and the heart-wrenching suspense (seriously, Hitchcock would be proud) makes it the best thriller in years. Pay close attention to the ending — I’m hearing that many people dislike it — and you’re let in on what we’ve really witnessed during the prior two hours: a lamentation on aging, fate, chaos, and control.

2. Sweeney Todd: The Demon Barber of Fleet Street
Another bitter nugget of misanthropy, Tim Burton’s adaptation of Stephen Sondheim’s slasher musical is positively giddy about its brutal gore. Amid Burton’s gorgeously weird visual flourishes, and Sondheim’s lovely quasi-opera, the (quite literal) bloodbath elements were as shocking the second time I saw Sweeney Todd as the first. Performances by Johnny Depp, Helena Bonham Carter, Alan Rickman, and lil’ Ed Sanders are pitiless, and Sacha Baron Cohen (in a, ahem, brief role as a greasy snake-oil showman) adds a delicious touch of camp trash. Handsome, savage, and unabashedly ghoulish, Sweeney Todd is a genre-defying stunner, and the best movie musical of recent years.

3. Ratatouille
A beautifully shrewd bit of Pixar pop-entertainment genius about a rat in the kitchen. In said kitchen, more goes on than meets the eye: A highly-skilled upstart supports the clueless minion of an established but fading organization after its beloved founder (and namesake) dies. The powers that be have sold out the beloved leader’s image and reputation for quick profit… an error in judgment that is corrected when the upstart ends up taking over the operation. Status quo is challenged, a major reorg takes place, and the old school is forced to rethink its antiquated assumptions. A Disney allegory if I ever saw one. And it’s absolutely brilliant.

4. Inland Empire
For some reason David Lynch’s latest didn’t open in Seattle until mid-January 2007, despite being in limited release elsewhere the month prior. But I was thrilled when I finally did see it. The always-brilliant Laura Dern appears in nearly every shot of every scene during the three-hour runtime, and her multilayered (some may argue multi-role) performance is simply astonishing. Her character, a Hollywood actress much like Dern herself, takes the lead in a new movie based on a Polish film which stopped production after the murders of the two leads… and that’s the most concrete plot summary I can offer you. This is a Lynch film, so we know not to bemoan its inscrutability, but I see it as a meditation on what happens — for better or worse — when a text leaves its creator and assumes a life of its own. Empire is a mindfuck, a work of art, and the product of a mad genius.

5. There Will Be Blood
Speaking of mad geniuses, there’s at least one in director Paul Thomas Anderson’s latest, about an aspiring oil tycoon (Daniel Day-Lewis, in a mesmerizing performance) who sets up shop in a dusty, isolated, early-20th-century Western town with a citizenry captivated by an up-and-coming religious leader (Paul Dano). Loosely based on the Upton Sinclair novel Oil!, it’s a beautifully-drawn (and really fucking weird) American period epic about the struggles (and conspiracies) between commercialism and religion, told with a level of eccentricity and ferocity not seen since… well, since No Country For Old Men. It’s not quite right to say that Anderson is at the top of his game: with Blood, he’s playing a new game entirely.

6. Eastern Promises
David Cronenberg’s enthralling vision of the dark heart of the Russian mafia in London has as its centerpiece a painfully intense nude fight scene that you may have heard about. Stunning, no question, but not the only unforgettable thing about the director’s second deliberately-paced, Viggo-starring crime genre flick in as many years: central performances from Mortensen (as a chauffeur who knows too much), Naomi Watts (as a midwife who ditto), Vincent Cassel (the fuckup son of the local mob boss) and Armin Mueller-Stahl (said boss) make the shocking violence of their compelling story resonate all the more.

7. The Lives of Others
Another 2006 release elsewhere that was a 2007 film for me. German director Florian Henckel von Donnersmarck’s film (ridiculously accomplished for a debut feature) takes place in mid-’80s East Berlin, where a successful playwright (Sebastian Koch) and his girlfriend (Martina Gedeck) are placed under Stasi surveillance for suspected espionage. Their investigator, a lonely ascetic by the name of Wiesler (Ulrich Mühe), is charged with entrapping them, and he’s up to the task… at first. Themes of envy, terror, and paranoia are explored with magnificent tautness and clarity, and, like Inland Empire, the ending leaves you feeling exhausted, relieved, and oddly uplifted.

8. The Savages
Written and directed by Tamara Jenkins (her first feature since 1998’s Slums of Beverly Hills), The Savages concerns smart, squabbling, self-absorbed siblings Laura Linney and Philip Seymour Hofman (giving two of the best performances of the year) being challenged to remove their heads from their asses and care for their ailing father (Philip Bosco). So it’s another dysfunctional family dramedy, to be sure, but the film is really about the endless difficulties of long-term love… and there’s nary a moment of unearned sentiment to be found. Its ugly radiance makes it hilarious, and its candid wisdom makes it profound.

9. Starting Out in the Evening
Andrew Wagner’s second feature is about a solitary 70-something NYC novelist (Frank Langella, doing award-caliber work), ailing and mainly forgotten in literary circles; an over-eager grad student (Lauren Ambrose) writing a thesis about him; his daughter (Lili Taylor), a pushing-40 yoga instructor who yearns to have a baby; and her former boyfriend (Adrian Lester), an academic who has a son from a previous marriage and who doesn’t want another kid. About an hour in, I found myself in a special kind of love with each of them, and with the wonderful New York story they inhabit.

10. Brand Upon the Brain!
It’s a sin that this locally-produced silent fever-dream by the great Canadian auteur Guy Maddin wasn’t part of this year’s SIFF lineup, but the Cinerama’s live-scored gala screening last fall (sponsored by the always-great Northwest Film Forum) made up for it. The film’s central character (also called Guy Maddin) returns to the island lighthouse where he grew up, and once there recalls his miserable childhood. Most of the film, told in flashback, is about young Guy, his older sister, and mysterious events surrounding the private orphanage run by their tyrannical mother and mad-scientist father. No pricey CGI-centric summer blockbuster could hold a candle to Maddin’s black-and-white, Super 8 shadow magic and old-school cinema tricks. Brain is a sublime spectacle, and a special kind of crazy.

Fiction: 2 Days in Paris; After the Wedding; Atonement; The Aura; Away From Her; Before the Devil Knows You’re Dead; The Bet Collector; Beyond the Gates; Black Book; The Bothersome Man; The Bourne Ultimatum; Children; The Darjeeling Limited; The Diving Bell and the Butterfly; Dry Season; Eagle vs. Shark; Emma’s Bliss; Glue; Grindhouse; Hairspray; The Host; I Don’t Want to Sleep Alone; I’m Not There; The Italian; Juno; Killer of Sheep; Knocked Up; La Leon; Lady Chatterley; The Lookout; Lust, Caution; Michael Clayton; A Mighty Heart; Moliere; The Namesake; Once; The Orphanage; Paris Je T’Aime; The Simpsons Movie; Stardust; Sunshine; Syndromes and a Century; Tears of the Black Tiger; Ten Canoes; Things We Lost in the Fire; The TV Set; Vanaja; Waitress; Wristcutters: A Love Story; Year of the Dog; Yella

Non-fiction: Angels in the Dust; Autism: The Musical; Big Rig; Crazy Love; Czech Dream; Deep Water; The Devil Came on Horseback; The Fever of ’57; Ghosts of Cite Soleil; Into Great Silence; Jonestown; King Corn; Life in Loops; Manufactured Landscapes; My Kid Could Paint That; No End in Sight; Out of Time; The Real Dirt on Farmer John; Show Business: The Road to Broadway; Sicko; Summercamp; The Trials of Darrell Hunt; You’re Gonna Miss Me; Zoo