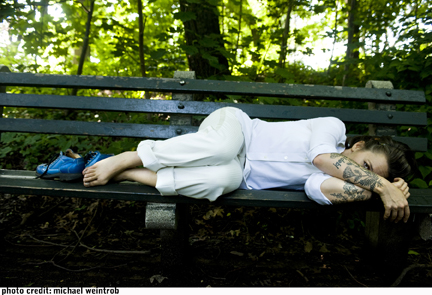 Erin McKeown at the Tractor tonight

Erin McKeown, the folk singer-songwriter who plays tonight at the Tractor with fellow traveller Jill Sobule, has a song on her newest album called “(Put the Fun Back in) Funeral”, which isn’t quite as fun as it might sound, but that is one of many reasons why I like Erin McKeown and recommend her show tonight. My favorite song, actually from her album, Hundreds of Lions (released on Ani DiFranco’s Righteous Babe label) is the one that precedes “Funeral”, the upbeat “The Foxes”, which is a catchy little song complimented by McKeown’s voice, which here is neither soft and delicate nor rough and abrasive, somewhere just in the middle.

Hundreds of Lions can boast of being a number one album, if you look at the charts in a certain way. It was the number one album on Amazon’s mp3 charts briefly a few days after its release (although Amazon’s digital sales make up a small fraction of the digital sales that are computed into Billboard’s charts – the bulk still comes from iTunes). Still, how many people can boast of playing songs from their “number one album” truthfully? McKeown will be doing just that tonight at the Tractor. Well, I don’t know if she’ll boast about it (it is more of a technicality), but she could.