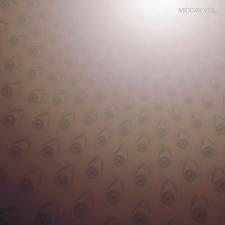 Seattle band Midday Veil, the core of which is vocalist and guitarist Emily Pothast and master synthesizer musician David Golightly, have happily bear-hugged with producer Mell Dettmer (whose CV includes Sunn 0))), Jesse Sykes, and Kinski) for their widescreen and elastic debut, Eyes All Around. This three-way marriage of heavenly voice, humming drone, and wizardly recording makes the full-length a spacious but stunning, sensual yet cerebral, mutation of song and space.

Created out of her struggle in coming to terms with the car-crash deaths of her parents a few years ago, Pothast carefully put the elements of Midday Veil together with Stockhausen-taught programmer and analog synth obsessive Golightly. As a form of meditation and a manual on a way to continue keeping on, you can hear this ontological battle in the clarity of the vocalized tracks (“Anthem,” “Divide By Zero”), but also in the mindful instrumentation throughout.

Just when you think, on the ten minute opener “We Are You,” that this is another inspired blast of hipster bliss, an unsettling transference between the living and the dead, between the possessed and the objectified, creeps out through the lyrics. You can tell the two have been paying close attention to peers and heroes throughout their musical careers, which include putting together the Portable Shrine Collective’s yearly Escalator Festival. They’re tied in, and evolving current sounds from shallow pop irony into moving musical statements based out of experience and relatable experimentation.

Much of this creativity is assisted by drummer Chris Pollina and Timm Mason (from Mood Organ, on trembling baritone guitar), and live with multi-media accompaniment. They’re involved in every aspect of their aesthetics, and trust artists like Dumb Eyes to help with videos.

In the combination of a very human voice with a wry, wise understanding of how machines work to create emotion in us, Eyes All Around can be easily compared to any number of ubiquitously cherished groups. It is a uniquely spiritual statement, though, and Midday Veil may be one of Seattle’s very best next new things.

You can describe the band’s music, but every time you try to claim checkmate on an influence, the album whispers distortion. Mazzy Star, yes, yet much more cosmic and demystifying; Pink Floyd, but with none of that band’s burdens of male melancholy or aggression; Portishead and Stereolab, but no sense of weariness or pop art irony. Midday Veil have the art and authenticity of good psych rock, with none of the grimy regret of that genre’s gummy-headed next day awakening.