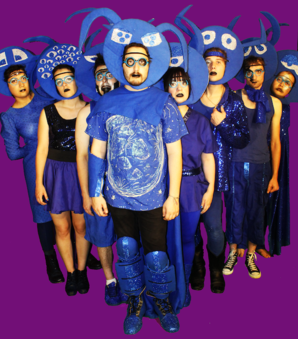 When it comes to music, when it comes to pretty much anything, I’ve always been a style over substance kind of guy. I think it’s great that KISS put so much work into their costumes and stage show, but I would have much preferred songs that I actually liked. Other than Bowie, in fact, I can’t think of too many artists I admire who have successfully married style and substance. Which is why it’s so refreshing that The Fabulous Downey Brothers seem intent on providing both.

This Olympia-based outfit played to an adoring and enthusiastic crowd at The Comet Tuesday night, supported by Lakefight and Sebastian Clark. Adorned in blue costumes with sizable headpieces, they could have just stood on stage and immediately been different than virtually any other local band. But merely stand on stage they did not. Conflating a cauldron of hardcore, synthpop and musical theater, FDB whipped through an intense set featuring short bursts of controlled chaos. At times it was as if I were watching They Might Be Giants performing under the influence of ridiculously potent amphetamines.

On the surface, the backdrop seems pretty simple- vocals, two guitars, bass, drums and keys. Yet what FDB manage to do with these pedestrian resources is at times nothing short of shocking. We were treated to liberal audience interaction, incredibly catchy melodies and a clamorous wall of sound that kept my ears ringing well into the night. As this event unfolded, I was reminded of acts of divergent as TMBG, The Descendents and The B52s. They even threw in a Misfits cover for good measure.

I see only a handful of shows each year which exceed my expectations. I’m delighted to say this was one of them. You can check them out for yourself on Halloween at The High Dive. They’re loud, they’re electrifying, they’re a little insane, they’re spectacular. They’re The Fabulous Downey Brothers, and most importantly, they’re proof that in 2011, style and substance need not be mutually exclusive.